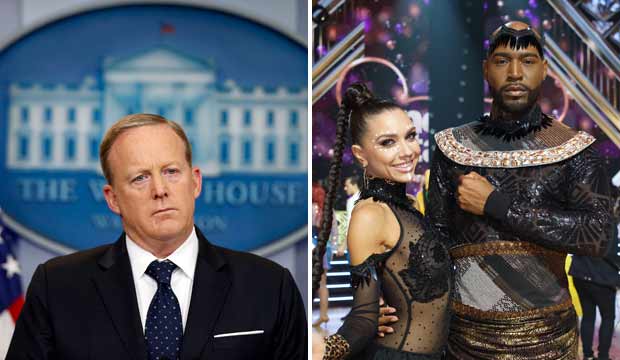 No one was eliminated from “Dancing with the Stars” on “Disney Night,” same as last year, but that reprieve was only temporary. The chances are slim there will be a non-elimination round two weeks in a row. So who’s time is up? Sean Spicer is the odds-on favorite to get the axe, but we thought the same thing last week. If he survives yet again, it might be bad news for “Queer Eye” star Karamo Brown.

As of this writing Spicer gets 9/5 odds of being eliminated based on the combined predictions of “DWTS” fans who have made their forecasts here in our predictions center. With Lamar Odom off the show, Spicer is now the bottom rung on the judges’ leaderboard, so he needs to depend on the kindness of viewers to keep him in the competition. They’ve kept him out of the bottom two for this long, but if he lands there tonight he probably won’t have anyone with lower scores than his. It’s unlikely the judges would vote to save him unless he has a stunning breakthrough on the dance floor, or if he can somehow convince them that his scores are much bigger than they really are — he’s used to that.

Brown is close behind in our elimination predictions with 9/4 odds. He has been hit-and-miss with the judges thus far, and with fans too. He has already landed in the bottom two once before. He might have landed there again on “Disney Night” if Tom Bergeron had revealed any of the results of that night’s voting. He has gotten consistently better scores than Spicer, so the judges would probably save him in a head-to-head. But if Brown lands in the bottom two and Spicer doesn’t, Brown might be out of luck because the remaining dancers have all gotten more consistent praise.

The irony is that Brown got flak for defending Spicer’s casting on the show after even Bergeron sounded off against it. Now Brown’s best chance is for Spicer to break his fall.