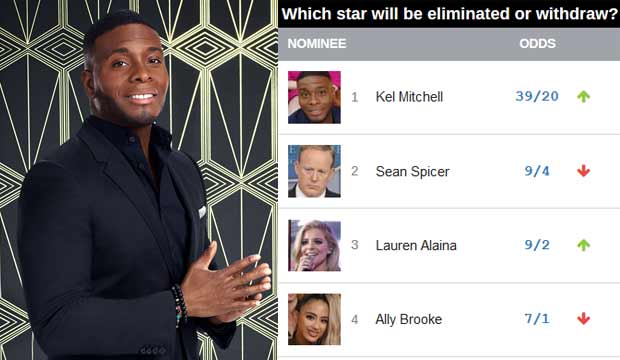 It’s clear who the worst dancer on “Dancing with the Stars” this season is, but it’s not clear if and when the voting audience will ever send them home. That could be bad news for comedian and actor Kel Mitchell because with only six dancers remaining in the competition and the top five bunched so closely together in terms of their season-long scores, there’s less and less of a safety cushion for someone like him in the middle of the pack. Indeed, the consensus of “DWTS” fans in our predictions center is that Mitchell will be eliminated. You can make or update your own predictions right here before tonight’s show.

Mitchell has landed in the bottom two once before, way back in week three when he and Lamar Odom were the unlucky duo. But Odom had the lowest scores by far, so the judges sent him home when it came time for them to choose. Since then, though, not only have Mitchell’s dancing and scores improved, so has his viewer support. Even with the competition narrowing down, he hasn’t been in the bottom two since.

But with Kate Flannery‘s elimination last week, there are now only two contestants left in the competition who ever have been in the bottom two: Mitchell and singer Ally Brooke. And if they land in the bottom two together, there’s a good chance the judges will save Brooke again since she has averaged higher scores season-long. But even if the judges have to make that decision one way or the other it’ll be through gritted teeth because it’s pretty clear they think Sean Spicer is long past his expiration date.

Mitchell gets 39/20 odds of being eliminated, followed by Spicer with 9/4 odds. So will the judges’ have to make another impossible decision, or will America finally come to its senses?