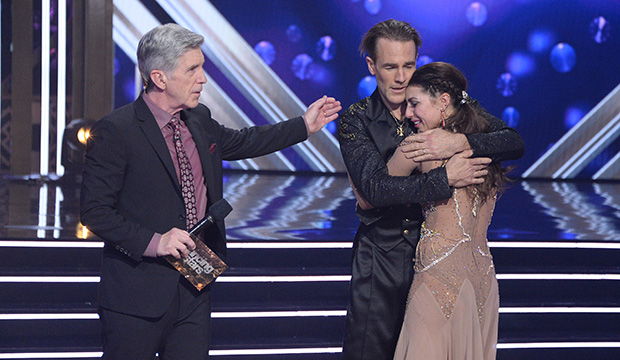 Emma Slater is still in shock over her and James Van Der Beek‘s elimination from “Dancing with the Stars” and wishes she could’ve “protected him” more after he and his wife Kimberly suffered a miscarriage last weekend.

“I wish that the show could have protected him a little bit more,” Slater told “Entertainment Tonight.” “Meaning, like, he went through so much this weekend. I feel like, not really the show, but I wish that the judges might have just been a little easier on him. They’ve got a job to do and it’s not fair of me to say that, but I do wish … I just wish I could have protected him from it, but I can’t because it’s just what happens.”

Van Der Beek revealed in his second rehearsal package, in which he announced the miscarriage, that he didn’t think he would perform on Monday’s semifinal, but Kimberly encouraged him to. The actor was understandably not at his best and landed at the bottom of the leaderboard and then the bottom two with Ally Brooke and Sasha Farber. The judges were particularly harsh in their assessment of his first dance, a cha-cha, which scored a 24, with nary a positive comment and Len Goodman criticizing Slater’s choreography. The judges later unanimously opted to save Brooke.

“For me, the elimination was a little bit of shock to begin with, and then tears happened,” Slater shared. “But I got more upset about this weekend and what had happened with James and James’ family and what he’d gone through. I was more visually and outwardly upset at that because that’s real life. There’s nothing bigger than that and family means everything.”

Brooke tried in vain to offer up her finale spot to Van Der Beek, which “didn’t surprise me at all,” Slater said. “She’s got a heart of gold … but James would never allow that to happen. We would never take someone’s spot that deserves to be at the finals. Ally, you deserve to be there.”

Slater is rooting for Brooke now since Farber is her husband. “Sasha’s my best friend. He’s in the finale. I’m so happy for him,” she continued. “Honestly, it’s the best when you get to go home with your best friend and he is gonna make it so much better for me. If I was by myself, I’d probably have a little pity party. But I’m not. I have my best friend and he happens to be the love of my life and he’s always gonna be there for me.”