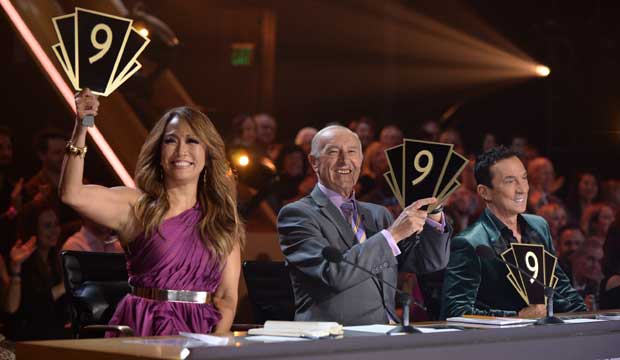 “Dancing with the Stars” has a voting problem, and producers haven’t addressed judging from Sailor Brinkley-Cook‘s surprise elimination in week six. She was one of the higher scoring celebs in the competition, and so was Ally Brooke, who landed in the bottom two with her after audience votes were combined with the judges’ scores. Clearly their high scores didn’t matter than much, and Sean Spicer‘s consistently low scores haven’t hurt him at all. So that seems to be the problem: too much power to the people, to the point where the scores hardly matter anymore.

Ironically, “DWTS” fans who voted in our poll said fans should have less influence on the results. A full half of our poll respondents (50%) said, “Whoever votes, it’s most important that the judges scores are weighed more heavily than the audience.” But that’s not all. Another 27% of readers went even farther, arguing that the audience shouldn’t vote at all: “Just let the judges decide,” which is the “World of Dance” model. And 4% argued, “Only let the studio audience vote”; that’s how “Dancing with the Stars: Juniors” set up their system, which prevents rabid online fan bases from skewing the results. So that’s a total of 81% of fans who would like to give up some of their power to the judges for the sake of the competition.

A minority of fans think the audience should have more power, not less: 12% want to “bring back national overnight voting,” which this season was replaced by live voting during the east coast broadcast. But that’s not a drastic expansion of viewer power so much as a return to the old status quo. Meanwhile, just 1% argued that “only the audience should vote” and they should get rid of the judges’ scores entirely. That’s how shows like “So You Think You Can Dance” and “American Idol” handle things: the judges voice their opinions after each performance, but audience votes are what count.

The “DWTS” voting system came under greater scrutiny after season 27’s eyebrow-raising victory for Bobby Bones, who didn’t have nearly the scores of his rival competitors. This year the show swapped overnight voting for live voting and empowered the judges to save one dancer from the bottom two, but if audience votes can still skew the results so much that the poorest dancers never even land in the bottom two, then what has the voting change even accomplished?

But whether you think the audience should have more power, less power, or none at all, only 6% of our respondents tink the voting system is just fine the way it is now. That means 94% of readers agree that something needs to change. 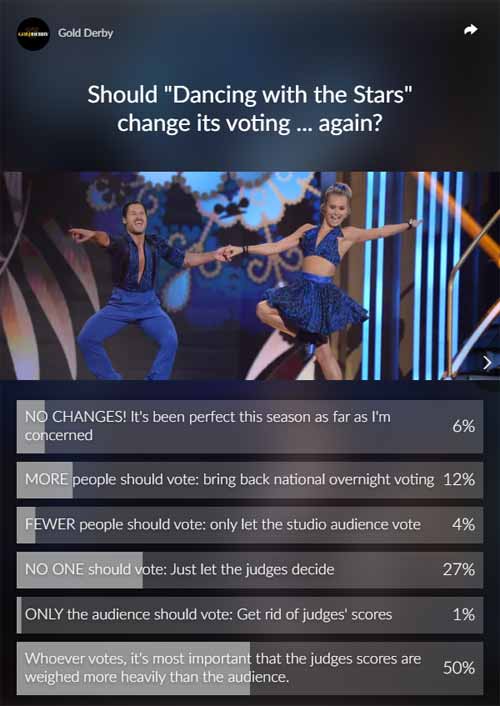