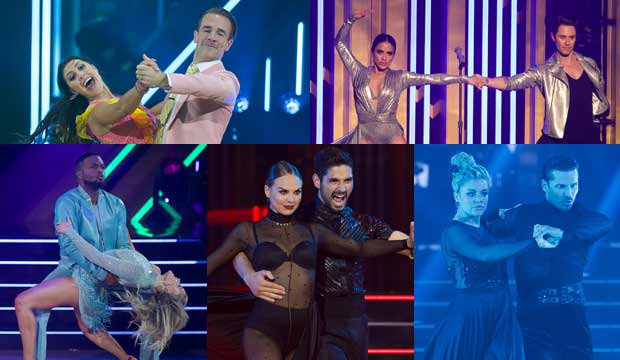 Now that a certain rhythmically impaired “Dancing with the Stars” contestant has been eliminated at long last, we’ve finally got a real competition for the Mirror Ball Trophy. And the five semifinalists are a more evenly matched lineup than we’ve seen on the show in recent years. So who do you think deserves to win now that we’re down to the cream of the crop: Lauren Alaina, Ally Brooke, Hannah Brown, Kel Mitchell or James Van Der Beek. Scroll down to vote in our poll at the bottom of this post.

The best dancer according to the judges’ scores is Brooke. After nine weeks of competition she has a higher average than anyone else (not counting guest judges or dance-off bonus points). However, she has also been in the bottom two twice this season, so it remains to be seen how her fan support will compare to her rivals’ as the season winds down.

Van Der Beek and Brown are the only contestants who haven’t been in the bottom two even once this season, and their season-long scores are behind Brooke’s by only a handful of points. They’ve been the top two all season in our racetrack odds, which are calculated by combining the predictions of “DWTS” fans who make their forecasts every week here in our predictions center.

That leaves Alaina and Mitchell, both of whom have been in the bottom two once each. Alaina landed there this past week on “Boy Band and Girl Groups Night.” It was an easy choice for the judges to save her from elimination against you-know-who, but her close brush with elimination might galvanize her supporters in the next two weeks; the same country music fans who pushed Kellie Pickler and Bobby Bones to victory may come through for her as well.

Mitchell landed in the bottom two way back in week three, when the judges’ decided to send home Lamar Odom instead. But he has clearly been on the right track because he hasn’t been back to the bottom since, and on “Boy Band Night” he got his first perfect score of the season. So even though Van Der Beek hasn’t budged from the top spot in our odds in recent weeks, the Mirror Ball Trophy is far from a done deal.

But forget about who will win. Tell us who you think should win in our poll below.