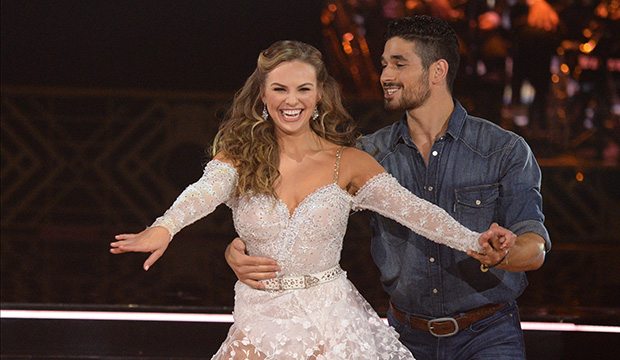 Hannah Brown and Alan Bersten were the last couple to be called safe on “Dancing with the Stars” on Monday, leaving fellow high scorers Ally Brooke and Sasha Farber, and Sailor Brinkley-Cook and Val Chmerkovskiy in the bottom two, with the latter pair getting eliminated. Brown and Bersten, who have the highest average score this season, were visibly worried about their fate until they were declared safe.

“You don’t know and even though I’ve been working so hard, putting everything into it, you never know when that’s gonna be your time, and I would be so sad if it came to an end because I feel like I just have so much more to give,” Brown told “Entertainment Tonight” (watch below). “This has been really great for me and just an emotional experience in the best way to grow and look forward to what my life’s gonna be like.”

Brown and Bersten were both shocked at the results and that Brinkley-Cook and Chmerkovksiy went home. “She got amazing scores. She’s been dancing amazing,” Brown stated. Brinkley-Cook, who broke down in tears following her elimination, and Chmerkovskiy were one of three couples to score a 27 on Monday, while Brooke and Farber got a 25. Both couples’ two-week totals — 51 and 52, respectively — were higher than that of Brown and Bersten, 49.

SEE ‘Dancing with the Stars” Ally Brooke can’t believe she and Sailor Brinkley-Cook were the bottom two: ‘It was completely shocking’

“It’s a big family, so tonight, the bottom two was shocking because they were both at the top of the leaderboard this week and they both gave so much,” Bersten said. “And I feel like it’s really hard because everyone left is giving their all. And someone has to go home, unfortunately, so we’re just very thankful we’re still here for another week and hopefully some more.”

He added to the fans: “Thank you, guys, for voting!”

Bersten also gave props to Brinkley-Cook, who replaced her mom Christie Brinkley at the last minute after the latter broke her wrist, for adapting and learning so quickly. “She has grown so much. She started this competition as a fan, watching her mom, and she made it to Week 6, which is such a testament to her. And Val did an incredible job with Sailor, ” he said. “People are going to be going home and everyone cherishes being here and you don’t want to go home, so it gets emotional when your friend goes home.”