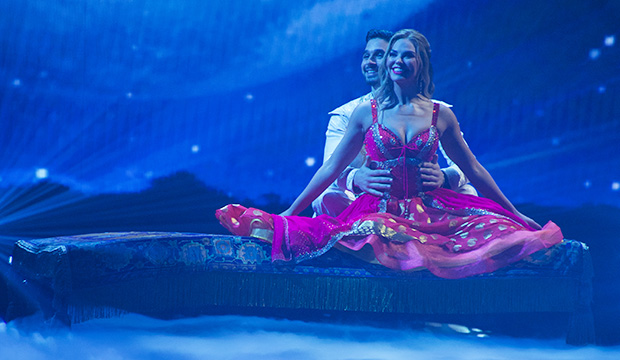 There’s no theme on Week 6 of “Dancing with the Stars,” but Hannah Brown and Alan Bersten‘s samba will have one: country.

“I can tell you that there is no theme next Monday, but we’re going to be country-esque, if that’s a word. (It totally isn’t, hahaha.)” Bersten revealed in his “Entertainment Tonight” blog. (Hey Alan, “-esque” is a suffix, so anything with it is a word.)

A country samba sounds… interesting? Country isn’t really the first thing you think of when it comes to a samba, but it can work. They likely got a country song — and one of the few songs ABC has teased for next week is Carrie Underwood‘s “Southbound,” so it all fits.

SEE ‘Dancing with the Stars” Hannah Brown and Alan Bersten sound off on that 7 from Len: ‘Grumpy ol’ Len’

Heading into the sixth week, the couple’s strategy is to “just keep on track and keep working hard,” Bersten said. After getting criticized by and getting a 7 from Len Goodman for Brown’s lack of frame on Disney Night, the pro promises to “definitely make sure to give him what he wants this week.”

“I can’t argue with him — he knows what he likes,” Bersten conceded, adding that he had wanted create a sense of flying in their “Aladdin”-inspired foxtrot. “Hannah and I are just going to keep working really hard, and I’m going to try and make the routines more appealing to Len.”

He is thrilled that they got their first 9s from Carrie Ann Inaba and Bruno Tonioli, but he knows 10s aren’t going to be easy to get this season with the judges’ harsher scoring. “Honestly, it was a great reward for all the hard work Hannah and I have been putting in every day,” he said. “I always tell my partners that I don’t care about the score and I just want them to go out and enjoy the dance and really let all the hard work pay off. But I would be lying if I said I don’t appreciate good feedback.”