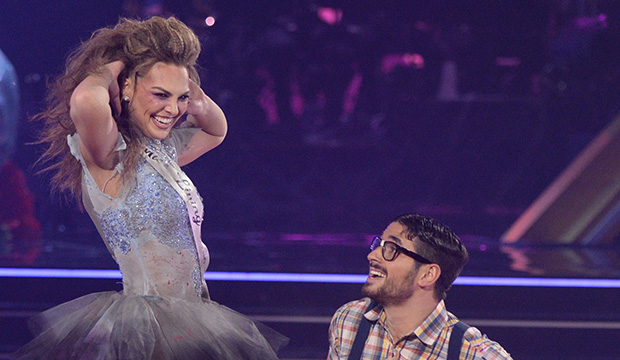 Looks like the “Dancing with the Stars” judges have moved on from hosing James Van Der Beek to hosing Hannah Brown. For a couple of weeks, Van Der Beek was getting underscored for his stellar routines, but he’s sort of back on track, so to speak, while Brown is now in the judges’ line of fire, taking another hit on Monday’s Halloween Night.

Though the judges underscored Van Der Beek, they were never overly mean in their assessments, merely giving him tips and pointing out things he needs to improve on (and complaining about a rumba being too passionate). Brown, on the other hand, has been (rightly) criticized for her pageant queen perma-grin since Week 1, but the tough love she’s been getting has progressively gotten tougher.

On Monday, while Len Goodman liked her and Alan Bersten‘s jazz number to Donna Summer‘s “Bad Girls” (a terrible song assignment for that dance), Bruno Tonioli advised her to “punch it” up more and Carrie Anna Inaba curtly told her she’s “disconnected” from the movements and “there’s something lacking in your performance.” Bersten later said they’re working on helping Brown overcome her insecurity. But the former Bachelorette was so distraught over the critiques that she teared up after the team dance, telling Inaba that she’s not a performer or an actor, but “a girl on reality TV” trying to do her best.

SEE Hannah Brown got more harsh criticism on ‘Dancing with the Stars’ for Halloween, but did she deserve it? [WATCH]

The team score of 27 boosted her total, but her individual score of 25 felt comparatively low considering some of the routines that received 9s were slightly messier (Kel Mitchell‘s) or stiff with mistakes (Lauren Alaina‘s; to be fair, she’s nursing some injured ribs). While the the criticism against Brown is understandable, she didn’t have mistakes, and the judges have historically been far more generous with scores for free-for-all dances like jazz and contemporary.

Why didn’t Brown get this free pass? It could be for the same reason why they were possibly underscoring Van Der Beek. Like with him, they know she’s good and is pulling in the votes, and in the interest of not burdening her as the outright one to beat/creating a more compelling narrative, they’re more nitpitcky. Because her claim to fame started on ABC, many fans believe she’s the production/network pet, so being hard on her is a way to mitigate that too.

These are fun conspiracy theories, of course, but maybe the truth is far more simple: She hasn’t actually improved that much in the last seven weeks. She’s always been good and she’s not getting worse, but she’s just sort of at this plateau. A great technical dancer, Brown clearly has no issue learning and memorizing the steps, but she still has trouble getting into the mood and characters and truly selling the performances.

Her “storyline” this season has been to erase her pageant smile, which obviously is not suitable for every single dance. She had an entire package of her going to a rage room to unlock Hannah Beast to be intense for the paso doble, but she still flashed the smile during the routine. The cheeky “dead pageant queen” theme for their jazz was a good idea to “kill” the persona and show a darker side to her, but the grin was still plastered on her face the second the music started. The pageant smile is her default, and maybe the judges are just kind of sick of it at this point, more than halfway through the season, and they do genuinely want her to improve.

Brown has been open about her struggle with depression and anxiety, so it’s hard not to feel for her when she’s near tears explaining how difficult it is for her to act and open herself up and be free on the dance floor. The pageant world is very different from dancing, but they are both about putting on a performance; the former is one of an idealized avatar and the latter demands you break down your inhibitions and channel your emotions. What’s more, Brown has had dance training in her youth, and dance was her talent in pageants, so she’s not completely new to this. And she’s desperate to do a contemporary, which is all about leaving your emotions on the floor.

Even if the judges continue playing drill sergeant with her and/or that plastic grin doesn’t leave her face, Brown is still a near-lock for the final. She can dance, she has the fan base, and she now has the sympathy card thanks to the judges’ comments.

'The Masked Singer' spoilers: The Frog is ...

'The Masked Singer' spoilers: The Banana is ...