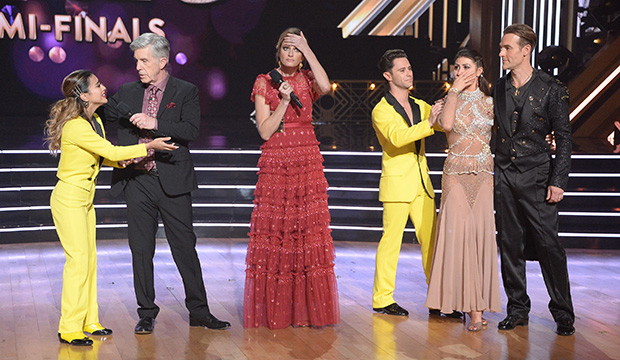 “Dancing with the Stars” ended with a shocking and heartbreaking elimination on Monday when the judges opted to save Ally Brooke over James Van Der Beek. Brooke herself was so torn up that she offered to give up her spot in the final to the “Dawson’s Creek” star — and yes, she really did mean it.

“Absolutely. In a heartbeat,” a somber Brooke told “Entertainment Tonight” when asked if she would actually have done so (watch below). “And I even told him afterwards, I said, ‘Please, I feel like I don’t deserve this. This is you.’ So 100 percent. If he were to come to me right now and said, ‘Changed my mind,’ I’d say, ‘OK! Here it is.'”

Van Der Beek announced in a rehearsal package on the show that his wife Kimberly had suffered a miscarriage on Saturday, and while he didn’t plan on performing in the semifinal, Kimberly encouraged him to do so. He understandably had a subpar night by his standards and landed at the bottom of the leaderboard and in the bottom two for the first time. Brooke, who had the highest score and was in the bottom two for the third time, received unanimous votes from the judges to stay, much to everyone’s shock. She pleaded with both Van Der Beek and Tom Bergeron to give up her spot to no avail.

“I felt like that was the right thing to do, and I guess it’s just not gonna happen. But I tried and I love James and I’m going to be praying for him and his family for what they’re going through right now,” Brooke said. “And that’s all I can do, really, and I know he loves me and I love him. And just try to get through this. It’s such a weird scenario.”

The former Fifth Harmony member added that she thought it was “not right” that Van Der Beek was axed. “I don’t believe it’s fair that he was sent home, so I just wanted to give my spot to him,” she continued. “He’s been through so much and he’s overcome so many things. Especially this past week, I just felt it was right to give it to him. Obviously he didn’t accept it. I talked to him and he was proud of me. He told me, ‘Don’t be afraid to shine.’ So I’m going to take that with me and I just have to do this for him, is what I feel.”

The elimination was doubly bittersweet for Brooke’s partner Sasha Farber since he’s married to Van Der Beek’s partner Emma Slater. The couple was attempting to be in the final together for the first time. “I know how hard [Slater’s] worked and it’s just one of those horrible scenarios that you just do not want to be in,” he added. “At the end of the day, listening to James’ story and looking at Emma, you realize that this just a dance show and what’s important is family. And what you get out of this show is true family. We’ve made family with James, Ally’s part of the family. It feels like we’re one clique now.”