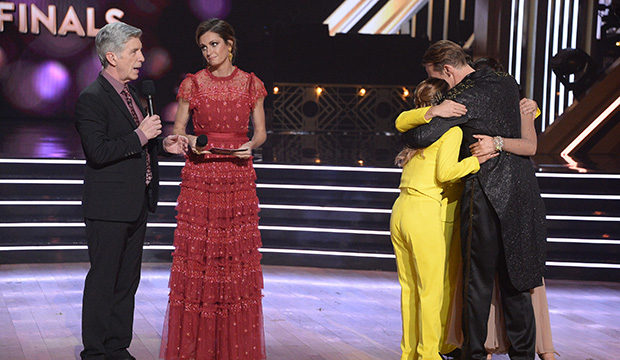 Just when you thought it’d be smooth sailing the rest of the season after Sean Spicer’s elimination, “Dancing with the Stars” threw in another doozy — and wrong — result on Monday’s semifinal.

James Van Der Beek had an understandably off night after his wife Kimberly tragically suffered a miscarriage on Saturday. He landed at the bottom of the leaderboard and in the two for the first time opposite Ally Brooke, there for the third time, and the judges inexplicably chose to save her over him (not even one vote for him, really?!). Even Brooke was aghast and sweetly tried to give up her finale spot to him.

Well, we shouldn’t say “inexplicably” because their choice is quite explainable. They overscored Brooke to get themselves stuck between a rock and a hard place.

Van Der Beek was the best dancer the whole season — since the very first week — and it’s clear everyone knew that. Hell, everyone knew that before the season started. And he has an affable personality and was a fan favorite — all the makings of a potential winner. Was he perfect? No, and he was far from perfect on Monday, but overall, he’s been objectively better and more consistent than Brooke. If the judges are voting based on the whole season, as they claim to be, then it should’ve been an easy 2-0 to save him (and 3-0 if you want Len Goodman’s would-be vote).

That they didn’t save him suggests that they felt like they couldn’t. Now, look, with all due respect, Brooke is a great dancer and has improved throughout the season, but not as great — or perfect — as her scores would have you believe. And none of anything that’s happened is her fault; she just went out and danced the best she could. But she’s become the judges’ pet. Since her first stint in the bottom two in Week 6, the judges have been padding her numbers, as if they were given a heads-up that — as we now know — the singer unfortunately isn’t pulling in the votes, and they have rarely given her the nitpicky criticism that others, like Van Der Beek, Hannah Brown and even Spicer, have gotten. She earned the first perfect score in Week 8 and landed in the bottom two a second time.

Last week, she got two perfect scores, which honestly felt like a ploy to give her some breathing room from Spicer’s fan base to get him in the bottom two. On Monday, she had the highest score of the night and earned another 30 for her Charleston, which was out of sync at the beginning — something very clear to anyone with eyes and yet the none of the judges mentioned it.

For whatever reason, the judges are pushing Brooke hard, and their inflated scores and gushy praise give the impression that she’s the runaway best and no one else comes close — hardly the case with the top five. So they would look “dumb,” on paper, if they eliminate the top scorer of the season — a title Brooke claimed from Van Der Beek last week, thanks to her two 40s. They feel like they can’t ax her now. It’s like they were so busy protecting Brooke that they probably never thought Van Der Beek would be in the bottom two (to be fair, no one did) and opposite her. But one “bad” week — and he was not terrible — shouldn’t erase his far superior season that doesn’t have the numbers to back it up because he’s been underscored.

Plus, Van Der Beek obviously ended up in the bottom two because he had the lowest score, a 51 — three points off of the next closest, Brown and Lauren Alaina, six behind Kel Mitchell and eight behind Brooke. This is the second time Brooke has been in the bottom two with a perfect score. She was already the first person to survive two appearances there and even she was worried that the judges wouldn’t save her a third time.

SEE Why the hell do the ‘Dancing with the Stars’ judges keep underscoring James Van Der Beek?

This was the time for the judges to acknowledge what was clear: The viewers aren’t here for Brooke, and cut her loose. The new elimination format was devised to protect good dancers from early eliminations and prevent a Bobby Bones-type win (and is imperfect since Spicer made it to the quarterfinal and Bones likely would’ve won anyway with this format), but at some point, you also have to take into account when someone keeps landing in the bottom two despite super-duper high scores. Fans aren’t feeling Brooke — who knows why — and it’s dismissive to viewers to continue to save her when she’s not getting the votes. Hate Bones’ win all you want, but he won fair and square based on the rules. If the judges can save someone the fans didn’t vote for three times, then they might as well just eliminate viewer voting altogether and let the judges decide everything.

There’s a conspiracy theory that Van Der Beek asked to leave and this was a mercy elimination, but that doesn’t add up. Sure, the actor said he didn’t think he was going to perform, but his wife encouraged him to, so the assumption is she would’ve wanted him to finish the season if he had the chance (and it’s only one more week anyway). And if he really did want to bow out, the show would’ve just let him withdraw and announced it. Many people have pulled out because of extenuating circumstances and it’s always been an announcement on air. Besides, it would be entirely unnecessary and cruel to make a guy who just lost his sixth child 48 hours ago go through a fake bottom two and elimination for television’s sake. “Dancing” is ridiculous, but it’s not mean.

But, ultimately, even though the judges made the wrong call, Van Der Beek is probably not too bent out of shape over his elimination. He can spend time with his family now because there are more important things in life than a silly dancing show.