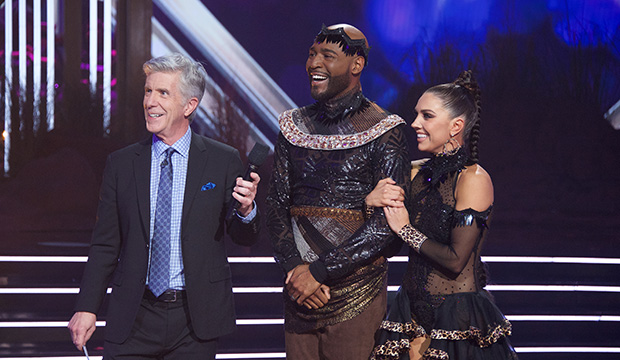 After delivering his best performance so far last week on “Dancing with the Stars,” Karamo had a bit of a setback on Disney Night with his samba, though he still earned 7s across the board. But with 9s being thrown out for the first time and Lamar Odom gone, that 21 put the “Queer Eye” star second from the bottom, behind only Sean Spicer. His partner, Jenna Johnson, is hoping to turn it around soon with some “validation” from the judges.

“I think we haven’t gotten away yet with a ‘That was fabulous comment,’ so I’m really looking forward to getting that and I will keep pushing Karamo. I’m hoping soon for both of our sanities that we will get that validation of our partnership soon,” Johnson wrote in her “People” blog. “For Karamo individually, he is working so hard, and he is putting his heart and soul into this.”

SEE ‘Dancing with the Stars” Hannah Brown and Alan Bersten sound off on that 7 from Len: ‘Grumpy ol’ Len’

The judges this week praised Karamo’s energy and joy in their “Lion King”-inspired samba — and Johnson is pleased that the trio led off with positive comments — but they once again pointed out issues with his technique, including his footwork in the running promenades. While the judges are never outright mean with their comments, Johnson admits that it’s tough to take negative remarks, even when constructive, week after week. “I know speaking for myself, there’s only so many critiques one can take before they get a little disappointed and discouraged, so hopefully next week we really get that validation,” she said. “And I know we will both keep working at it until we do.”

The couple has the rumba next week, another dance that requires a lot of hip action. The Season 26 champ teased that it will be a “special story” that will hopefully highlight their partnership and connection, which Carrie Ann Inaba felt was lacking in their routines.

“I think this coming week means a lot to Karamo and I think it’s going to be a side we haven’t shown yet that means a lot to him,” she wrote. “Carrie Ann said something in her critique along the lines of ‘I want to see you guys connected, there’s a little bit of a push-and-pull going on,’ which I have definitely felt. She said she wanted to see us more unified as a partnership, and I’m really excited because I think next week will give us the opportunity to have time and showcase our partnership.”