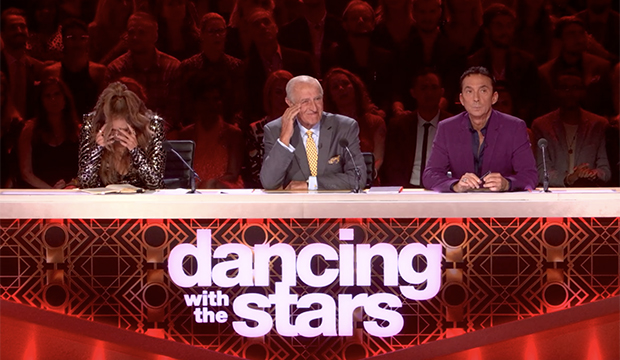 Carrie Ann Inaba is not quite “mad as hell and not going to take it anymore” over the “Dancing with the Stars” results, but she is definitely “a lot frustrated.”

The judge made her disappointment clear on Monday’s episode after Ally Brooke, who scored the first perfect 30 of the season, and Kate Flannery, who got a 24 and then won two more points in the dance-off, landed in the bottom two, while Sean Spicer continued to evade the bottom despite having the lowest score for the fourth straight week. “I’m absolutely confused and a little irritated,” she lamented, before the judges voted for Brooke to stay.

“It’s disappointing to see people go home like this week after week, and Sean is staying in, but it’s always been a partnership between the judges and the people,” Inaba told “Entertainment Tonight” after the episode (watch below). “That is what ‘Dancing with the Stars’ is. I can’t get too mad, but yeah, I’m a little frustrated. I’m a lot frustrated.”

Len Goodman concurred that such is the nature of the show with fan votes added to judges’ scores — “que sera sera, what will be will be,” he said — but he is loath to see good dancers go. “The biggest disappointment is there’s so many good dancers gone, from … when Sailor [Brinkley-Cook] went and on and on. I don’t like it,” he admitted. “It’s a bad vibe, but, look, it’s the show, right? That’s how it goes.”

Bruno Tonioli believes viewers are under impression that high-scoring couples will be safe without their votes, but numerous couples have been eliminated despite high scores. And as Brooke just proved, a perfect score wasn’t enough to keep her out of the bottom two. “I think people assume that because you’re on the top of the leaderboard, you are safe. And it doesn’t work like that. You really have to vote with your brain as well as your heart,” he said. “No one is safe. You really have to vote sensibly.”

Without specifically naming President Donald Trump supporters who are voting for Spicer to stick it to liberals, Inaba called out people for not actually voting for the best dancer after all the “complaints” about subpar dancers winning (ahem, Bobby Bones).

“What I want to say about this is, there are people who are working their butts off, and we’ve gotten so many complaints in the past seasons about not the best dancer winning,” she said. “So, these people who are voting just to spite us or whatever reasons they’re having in their heart — listen, I respect you, but how about having a little respect for the people who are working their butts off dancing? This is a dancing competition. It’s nothing else. It’s supposed to be about the best dancer. Put it where it counts!”