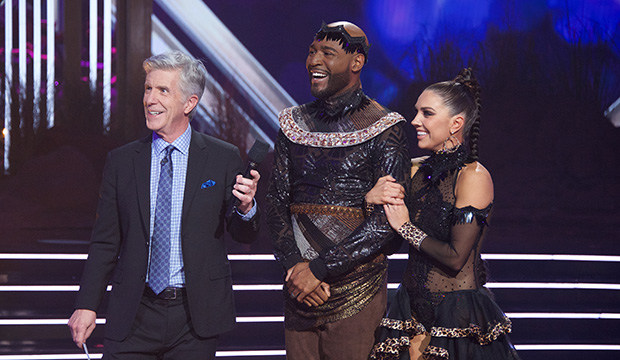 Karamo didn’t win “Dancing with the Stars,” but he is psyched that Hannah Brown did.

“I think that this was one of the best competitions and Hannah worked her butt off. She did such a great job,” the “Queer Eye” star told “Us Weekly.”

Brown and Alan Bersten beat Kel Mitchell and Witney Carson for the Mirrorball trophy last week. Ally Brooke and Sasha Farber placed third, and Lauren Alaina and Gleb Savchenko were in fourth place. Karamo, who finished in eighth place with Jenna Johnson, had nothing but high praise for all four couples who duked it out in the finale. “Everyone did such an awesome job,” he said. “And I mean, Hannah was perfectly designed for that dance floor and she took home the Mirrorball.”

Like everyone else, the activist was also “heartbroken” for James Van Der Beek when he revealed during the semifinal that his wife had suffered a miscarriage, after which the judges shockingly eliminated him over Brooke. Karamo, who had shared his own journey to fatherhood on “Dancing,” praised the actor and his wife Kimberly for being open with their story.

“What I was proud of was James’ strength and his wife’s strength to be able to share their pain with the world because I know so many people who have experienced loss and the loss of a child,” he said. “And a lot of times we feel like we need to hide that. And so the fact that he was open to share that was pretty amazing.”

'Making the Cut' designer Esther Perbandt on her 'milestone': 'That was the most important moment for me'…

'The Masked Singer' dream cast: Who would Billie Eilish, Taylor Swift and 8 other divas…

Here's everything you need to know about 'The Bachelor Presents: Listen to Your Heart'

The Masked Singer' season 3 schedule update: Sing-along on April 15, finale on May 27

Unaired 'Survivor' pizza challenge is the perfect example for why we need longer episodes, and 95% of…

'American Idol' won't be able to film in a studio ... but plans going forward are up in the…

ABC scraps 'The Bachelor Summer Games,' which is not surprising since the Olympics are…

'Top Chef' preview: Laughter and fine art are on the menu along with 'a Michelin star dish' [WATCH…