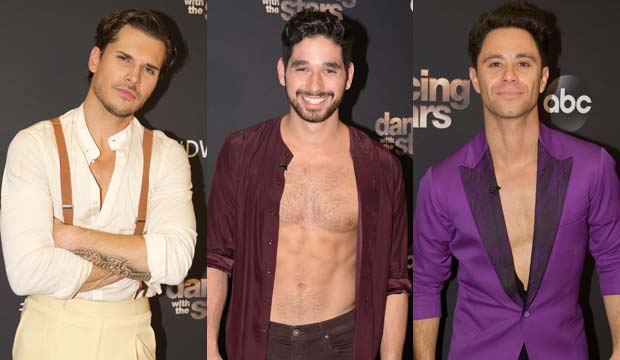 Going into next week’s “Dancing with the Stars” finals, all eyes are on the remaining celebs: Kel Mitchell, Lauren Alaina, Ally Brooke and Hannah Brown. But let’s not forget about their pro partners. With the shocking elimination of James Van Der Beek and Emma Slater during the Semi-Finals, there is now only one pro left who has won the Mirror Ball Trophy before: Mitchell’s partner Witney Carson, who prevailed in season 19 with Alfonso Ribeiro. So regardless of their respective celebs, which of the remaining pros do you think would be the most deserving first-time winner? Scroll down to vote in our poll at the bottom of this post.

Gleb Savchenko is currently partnered with country music star Alaina, and we must never underestimate the power of the country music fan base. Just consider past “DWTS” winners Kellie Pickler (season 16) and Bobby Bones (season 27). In fact, the only other time Savchenko made it to the finals was with another country singer: Jana Kramer, with whom he finished fourth in season 23. That was the only other time he made it past the midway point of the competition. This is now his seventh season on the show, and that may turn out to be his lucky number.

Sasha Farber is also in his seventh season on the show, and he’s been inching closer and closer to the title, finishing fifth with Terra Jole (season 23), fourth with Simone Biles (season 24) and third with Tonya Harding (season 26, the shortened athletes edition). Now he’s partnered with Brooke, with whom he has landed in the bottom two three times. But the judges have saved them every time, and that’s because they’ve racked up the season’s very best scores. So whether or not they get the viewer votes they’ll need, they’ve certainly danced like champs.

That leaves Alan Bersten, a relative rookie. This is only his fourth season on the show as a professional dancer, but he has already proven himself to be a formidable opponent. After his unfortunate 12th place finish in season 25 with Debbie Gibson, he drastically improved, finishing fourth with Mirai Nagasu (season 26) and Alexis Ren (season 27). And he’s partnered with Brown, the erstwhile “Bachelorette” who is the only contestant who has never been in the bottom two this season. So he very well may be on his way to his first Mirror Ball Trophy.

So which of those pros do you think would be most deserving of his first title? Vote below.