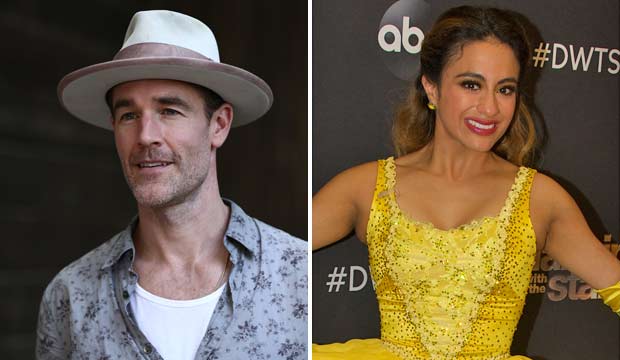 The season 28 premiere of “Dancing with the Stars” was the first and only night so far when actor James Van Der Beek finished on top of the judges’ leaderboard. But despite that, he’s still clinging to the top spot in our odds for who will win the Mirror Ball Trophy. It’s crowded at the top, though, as singer Ally Brooke puts pressure on the top contenders.

Our odds are based on the combined predictions of “DWTS” fans who make their forecasts every week here in our predictions center. As of this writing Van Der Beek gets leading odds of 15/8. This follows “Disney Night,” when Van Der Beek didn’t get the top score but came pretty darn close: he scored two 9s and an 8, giving him a total of 26, which was enough to tie him with Kel Mitchell for second place.

He got to close the show with his “Pirates of the Caribbean“-inspired paso doble, and he continues to demonstrate the kind of showstopping performance quality you need to get you to the finals. And even though he hasn’t gotten the top score for a while, he has almost always been close to the top of the leaderboard.

“The Bachelorette” star Hannah Brown currently ranks second with 49/20 odds. She and Van Der Beek have been trading the lead in our predictions for weeks now, and she’s holding steady in the runner-up spot even though our readers thought she gave the performance of the night on “Disney Night” — Len Goodman lowballed her with a shocking 7, while Carrie Ann Inaba and Bruno Tonioli gave her the 9s she deserved for her “Aladdin” foxtrot.

SEE‘Dancing with the Stars’ slugfest: Screwy ‘Disney Night’ scores and why James Van Der Beek is still the man to beat [WATCH]

But perhaps we should stop underestimating Brooke. Her “Beauty and the Beast” contemporary routine got the highest score of the season so far (9s across the board for a total of 27), and that was her third straight week topping the leaderboard. Despite that, she has been stuck in third place in our odds for the last three weeks. But if you look closely you’ll see that her odds keep steadily improving, and now she’s within a hair’s breadth of Brown at 57/20 odds.

After that there’s a steep drop-off to Lauren Alaina in fourth place with 16/1 odds, so it’s starting to look like this season’s Mirror Ball Trophy is a three-way race. Are you jumping on the Brooke bandwagon, or do you think Van Der Beek is still the one to beat?