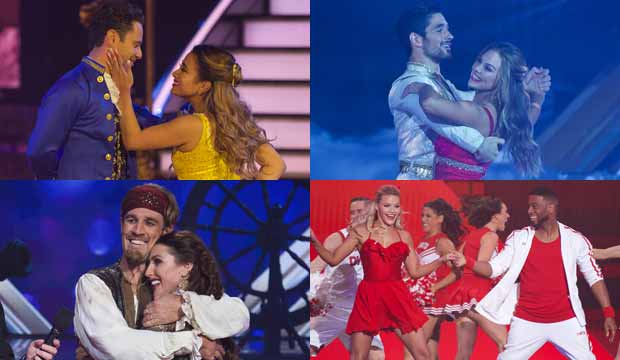 As much as “Dancing with the Stars” fans like to boo the judges for their mean critiques from time to time, their scores are usually vindicated in our polls, where their highest scoring dance tends to be our readers’ favorite too. Not this time. On “Disney Night” the judges thought Ally Brooke‘s contemporary routine with pro partner Sasha Farber was the best in show, but our readers begged to differ. Scroll down to see our complete poll results at the bottom of this post.

“The Bachelorette” star Hannah Brown gave the real best performance of the night, according to a plurality of respondents. She received well over a third of the vote (38%). She and her pro partner Alan Bersten performed a foxtrot to “A Whole New World” from “Aladdin,” but really it was only Len Goodman who found fault with the routine. Carrie Ann Inaba and Bruno Tonioli gave them 9s, the same scores they gave Brooke, but Goodman didn’t think there was enough dancing in hold, which was enough for him to dock them two points and give them a 7. That was enough to put Brown in fourth place for the night, even though our readers thought she was number-one.

James Van Der Beek finished second in our poll with 18% of the vote. His “Pirates of the Caribbean” paso doble with partner Emma Slater closed the show and got the second best score from the judges: 9s from Inaba and Tonioli and an 8 from Goodman, for a total of 26 out of 30. Brooke finished close behind with 17% of the vote after she got the season’s first straight 9s from the panel — even from Goodman! The only other dancer who got any 9s on “Disney Night” was Kel Mitchell for his “High School Musical” jazz routine with partner Witney Carson, but only 5% of our respondents thought it was the dance of the night.

Do you agree with Goodman that Bersten should have choreographed a better routine for Brown, or do you agree with our readers that his head must have been in the clouds during their magic carpet ride? 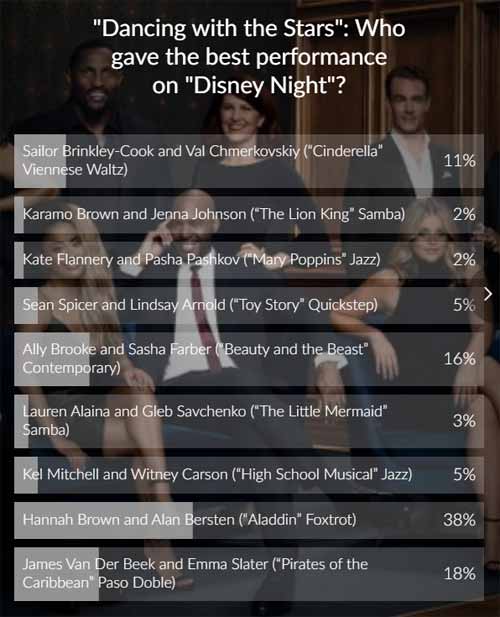