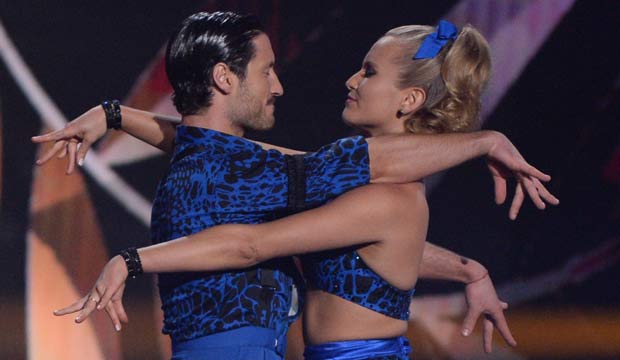 “Dancing with the Stars” screwed up by booting Sailor Brinkley-Cook at the end of week six. That’s according to a whopping 90% of fans who responded in our poll after her surprise elimination. She was sent home despite changes in voting — not the right changes, clearly — and despite the fact that she was the fourth highest-scoring dancer in the whole competition at the time she was ousted. Scroll down for our complete poll results.

Only 10% of our poll respondents thought Brinkley-Cook deserved to be eliminated. Indeed, she tied for the top spot on the judges’ leaderboard on the night she was sent home with straight 9s for her jive. Those scores also tied her for the highest scoring dance anyone performed all season. She landed in the bottom two with Ally Brooke, who has also been one of the season’s best competitors on the basis of her scores, which left the judges with an impossible decision. This season Carrie Ann Inaba, Len Goodman and Bruno Tonioli have been given the power to save one dancer in the bottom two from elimination, but it was clear they didn’t want to send either of them home.

Slightly more of our readers (12%) thought the judges should have eliminated Brooke instead of Brinkley-Cook, but the vast majority of our respondents (78%) thought someone else should have been eliminated who wasn’t even in the bottom two. We didn’t ask readers exactly which dancer that should have been, but I’m guessing a lot of them were thinking of a certain low-scoring propagandist whose name rhymes with Flan Flicer.

Check out the complete poll results below. Are you as frustrated by Monday night’s result as most of our readers were? 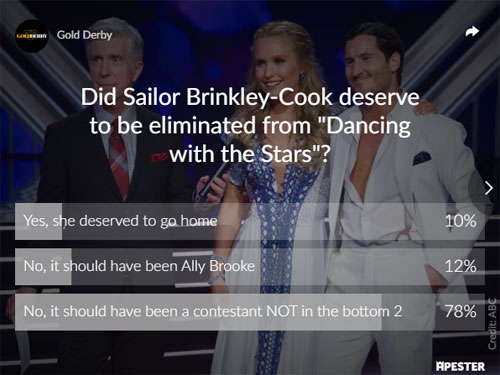 RSVP NOW: Make a date with Gold Derby every day to see the premieres of our fascinating chats with TV crafts wizards. Capacity is limited, so hurry to RSVP.

Which eliminated singer was most robbed on 'American Idol': Hunter Metts or Arthur Gunn? [POLL]

'American Idol': How to vote for your favorite Top 7 artist of Season 19

'The Voice': Now you can predict who will win Season 20 ... and who will be eliminated