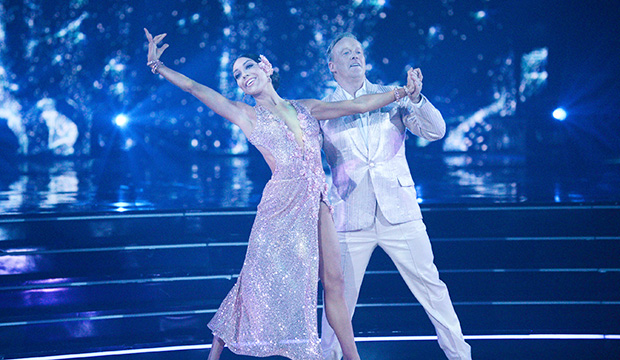 After escaping the bottom two the entire season, Sean Spicer finally found himself in jeopardy on Monday’s “Dancing with the Stars” and was eliminated over Lauren Alaina. His partner, Lindsay Arnold, was absent for the second week in a row in the wake of her mother-in-law’s death, but the two connected right after the show.

“She was so proud of how far that we’ve come,” Spicer told “Entertainment Tonight” of their conversation. “She’s obviously disappointed that she couldn’t be here. But I told her, and she knows, that the idea that we were as far we are is because of her hard work, her amazing talent and obviously Jenna [Johnson] the last two weeks carrying me.”

Johnson, who was eliminated with Karamo on Halloween Night, filled in for Arnold the past two episodes. She and Spicer scored a 26 for their Argentine tango and a 24 for their foxtrot on Monday’s Boy Band and Girl Group Night for a total of 50 — 20 points behind the next closest competitor, Alaina. The Season 26 champ said she enjoyed her brief time with Spicer and is “proud” of the work they did together.

“This guy [Sean] is one of the classiest men I’ve ever met,” she said. “He reminds me of my dad in a sense and I really enjoyed my time [with him].”

Spicer, meanwhile, is taking his elimination in stride, noting that he never expected to make the quarterfinals, especially with his low scores week after week. “To be here in the quarterfinals is a lot further than anyone probably, including myself, thought I’d be,” he stated. “It’s been such an amazing journey to get this far. I can’t say how much I truly enjoyed being a part of this season. I walk out of here with no regrets and a lot of great relationships, friendships and memories.”

“It’s not for lack of hard work,” he continued. “I couldn’t tell you how lucky I am to have had Lindsay and Jenna at my side. There’s no way I’d be even close to this week without them.”