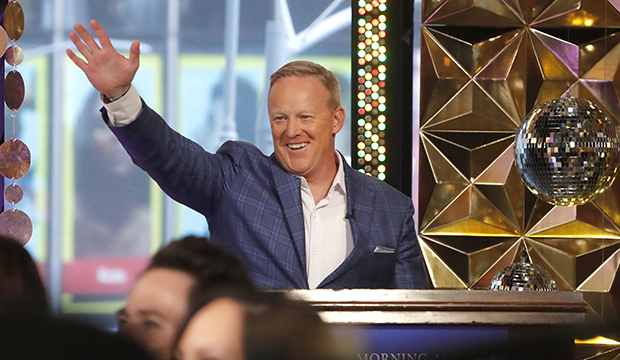 Sean Spicer is determined to keep politics out of the ballroom on “Dancing with the Stars,” which is an oxymoron since his mere presence is political. But the former White House press secretary knows there’s a time and a place to talk politics, and a reality dance competition show is not it.

“I don’t intend to,” Spicer told “Us Weekly” when asked if he discusses politics with his as-yet-to-be-revealed pro partner (click here if you want to know). “Everyone from the cast to the crew to the pros have just been really kind and friendly.”

Spicer said he expected backlash to his controversial casting, but he “didn’t expect it as quickly and as close as it was from internally,” referring to host Tom Bergeron‘s Twitter statement shortly after the cast announcement last month. In the lengthy statement, Bergeron made it clear he is not on board with Spicer’s casting and had previously voiced to new executive producer Andrew Llinares that he didn’t want any political lightning rods on a series meant to be fun, escapist television.

SEE Even Tom Bergeron is mad about Sean Spicer on ‘Dancing with the Stars’: He wanted relief from ‘exhausting political climate’

In response, Spicer, who has already said he wants the show to be a “politics-free zone,” told “The Hollywood Reporter” that he hopes by the end of the season, “Tom looks back on this and realizes what a great example it was of being able to bring people of really diverse backgrounds together to have fun with each other, engage in a real civil and respectful way and maybe show millions of Americans how we can get back to that kind of interaction.”

One of Spicer’s castmates, “Queer Eye’s” Karamo Brown, has already endured his own backlash after saying he was looking forward to getting to know and opening a dialogue with Spicer. He took a break from social media before returning on Thursday. Spicer admitted he felt bad that Brown bore so much ill will from fans because of him.

SEE Val Chmerkovskiy understands the Sean Spicer outrage: ‘Who knows if ‘Dancing with the Stars’ is a good thing for him?’

“He and I had a really fun talk — not about politics, just about getting to know each other and how excited we are about that opportunity,” Spicer shared. “That’s kind of been his trademark. He has tried to foster a more positive dialogue and he did it again and it was really great, but I felt bad because he was trying to be a good person. … He was obviously doing the right and good thing and he has the best intentions. We need more people like him as opposed to fewer. It was a shame that people were so nasty to him.”