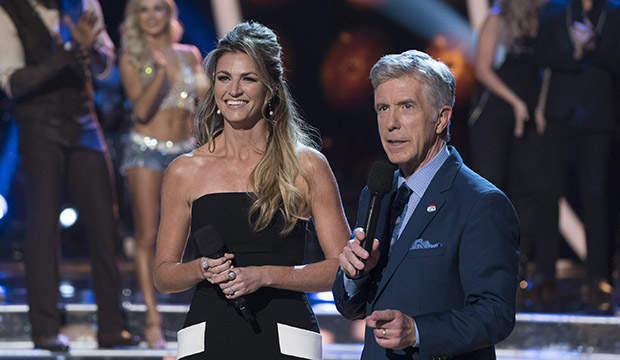 After a polarizing 27th season and a year-long hiatus, “Dancing with the Stars” is changing up the voting system, as hinted months ago by Tom Bergeron. In fact, you won’t even get to vote the first week! Yup, so just sit back, relax, watch the hoofing and read up on how you can start voting the following week.

The biggest change this season is that “Dancing” will be conducting live voting, aka you can vote while the show is going on. “Dancing” has done this before for various episodes, including last season’s finale, which was only one night. But this tactic means that folks in the Mountain and Pacific time zones will be voting blind while the show is airing in the Eastern and Central time zones.

So here’s what you need to know:

– There is no voting for Week 1 on Monday, Sept. 16. The routines that night — couples will perform the cha-cha, foxtrot, salsa or tango — will be scored by the judges only.

– The Week 1 scores will be carried over to Week 2 and combined with scores from that night.

– Live voting starts Week 2 at abc.com and via text and will continue the rest of the season.

– The first elimination will occur in Week 2 after live votes and scores are combined.

– Every subsequent week will feature live voting combined with the judges’ scores, which will be revealed during the episodes.

ABC made no mention of the regular post-show voting, which means that has been eliminated and all the voting is live. This essentially screws over anyone who can’t watch and vote live — not just half the country, but let’s say you have dinner plans that evening and were going to watch and vote when you got back after the show was over. Now you can’t. Again, the Mountain and Pacific time zone fans can still vote blind (or if they catch an East Coast feed), but the show airs during rush hour in their time zones, so people will probably be too preoccupied getting out of work to remember to text ABC to vote for Meredith from “The Office.”

This also hurts whoever goes last, especially if it’s someone who has an unexpectedly great performance no one saw coming. You’d have to assume that die-hard fans of someone would be voting for their faves regardless if they’ve performed yet or not, but those surprise breakthroughs could get hosed if they don’t have enough time to garner votes.

Credit to the show for trying to fix a broken system, but this may not be the best solution to say the least.