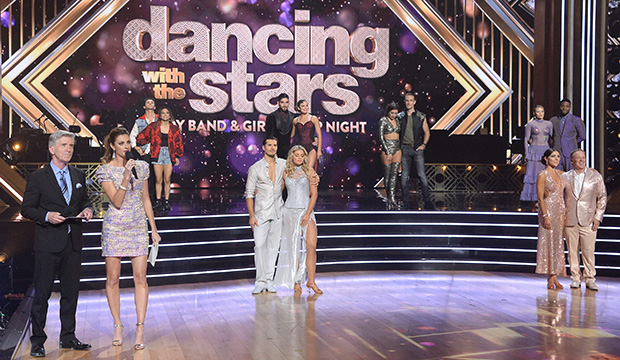 It’s the semifinal on “Dancing with the Stars,” and for the first time in five weeks, there will be someone other than Sean Spicer at the bottom of the leaderboard.

Which unlucky soul will it be? The final five are all pretty great dancers, and all of them have topped the leaderboard at some point this season, so expect some tight scores on Monday.

There will be two rounds: one redemption dance and one unlearned dance.

So Brown finally gets her wish to do a contemporary. Perfect score alert. And for Mitchell too.

Featured songs will include Kelly Clarkson’s “Stronger,” The Temptations’ “Get Ready,” Tim McGraw’s “Humble and Kind,” Hozier’s “Take Me to Church,” Vanessa Williams’ “Save the Best for Last,” Ed Sheeran’s “Perfect” and Whitney Houston’s “I Will Always Love You.”

As we previously noted, this is will be the last week for “Dancing” to do a double elimination since the finale is on Nov. 25. The show has made no mention of one and ABC’s press release again just references a single elimination, but that doesn’t really mean anything; they could just drop it on everyone the day of. But since the top five is pretty stacked and we’ve lost some good dancers at the expense of Spicer, TPTB may want to have as many people (four) in the final as possible.