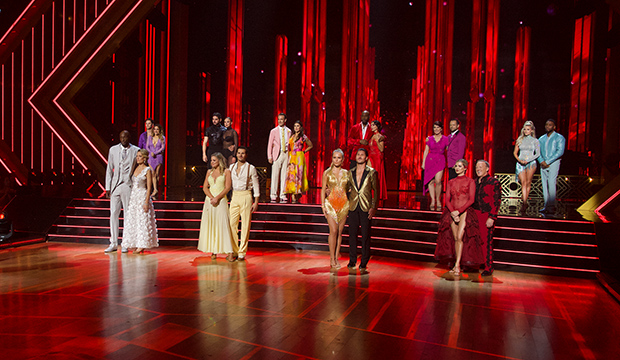 The remaining nine couples will venture to the Happiest Place on Earth for Week 5 for “inspiration” for their Disney-inflected routines. And after four straight weeks of ballroom and Latin routines, the polarizing contemporary and jazz dances will make their debuts.

Here are the routines for Monday night:

SEE ‘Dancing with the Stars’ episode recap: Lamar Odom gets the boot in Week 4

Some of the Disney tunes the couples will perform to include “We’re All in This Together” from “High School Musical” (not exactly what comes to mind when we think of a “Disney movie,” but reminder that the “High School Musical” series will debut on Disney+ next month, of which there will be a sneak peek in the episode), “Under the Sea” from “The Little Mermaid,” “A Spoonful of Sugar” from “Mary Poppins,” “Beauty and the Beast” from the live-action “Beauty and the Beast,” and “I Just Can’t Wait to Be King” from the live-action “The Lion King,” among others. Emphasis on “live-action” there. Still trying to make fetch happen, we see.

The episode will open with a pre-recorded routine, choreographed by Zach Woodlee (“Glee,” “Grease Live”) at Disneyland with the cast on Main Street in front of Sleeping Beauty Castle (a first apparently). One of the couples will go to the brand new “Star Wars”: Galaxy’s Edge theme park and fly the Millennium Falcon.

And if you’re not Disney-ed out by that point, there will also be a special routine choreographed to “Into the Unknown” from “Frozen II” and a first look at Disney+’s live-action “Lady and the Tramp” film.

Last season, Disney magic rendered Disney Night a non-elimination week and no one went home. Will that be the case again this time? We’ve already had a non-elimination in Week 3 due to Ray Lewis‘ withdrawal, but someone would’ve gone home anyway, so technically, the show is still on schedule. Plus, ABC makes no mention of an elimination in its press release — it only mentions voting — whereas it’s touted an elimination the past three weeks. Hmm.