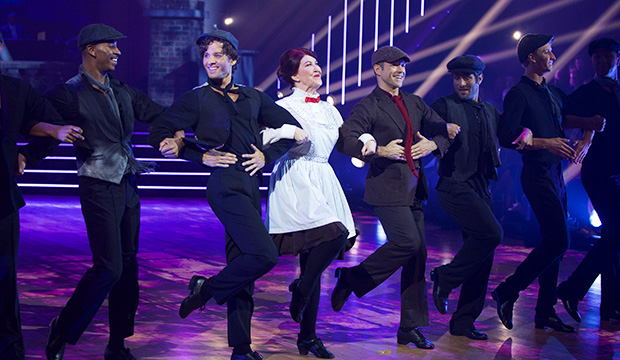 We called it: There was no elimination on “Dancing with the Stars'” Disney Night. You guys are so predictable. The remaining nine couples will hit the hardwood (again) in Week 6, which is theme-less.

Now that contemporary and jazz have made their season debuts, they will rear their ugly heads again on Monday’s show, so you can probably expect some 9s for those numbers.

Here are all the routines:

Brown struggled with the hip action in her rumba in Week 3, so we’ll see if she’s improved since then. At the very least, the jubilant samba will fit her bubbly personality and penchant for smiling during routines. Add in Van Der Beek’s samba and we’re gonna have ton of hip-shaking on Monday. Shakira would be proud.

Some of the songs this week include Carrie Underwood’s “Southbound,” Wham!’s “Wake Me Up Before You Go-Go,” Whitney Houston’s “I Have Nothing,” Queen’s “Somebody to Love,” Stevie Wonder’s “Part-Time Lover,” Lewis Capaldi’s “Someone You Loved.” There will also be an opening number to Kool & the Gang‘s “Celebration” and a special performance by the cast of the “Dancing” tour, choreographed by Mandy Moore.

And yes, there will be an elimination this week. One of the dead giveaways that everyone would be spared on Disney Night was that an elimination was not mentioned in ABC’s press release about the episode; such is not the case this time.