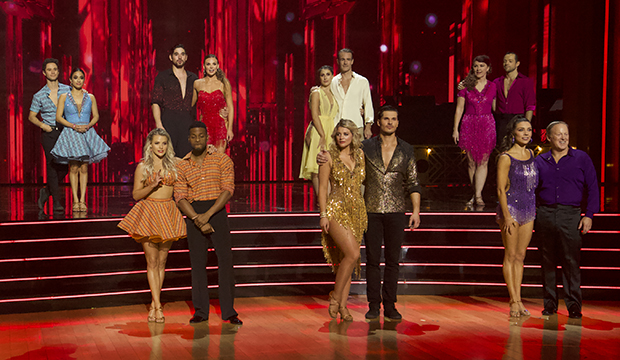 It’s every ’90s teenybopper’s dream come true on “Dancing with the Stars” Week 9 with Boy Band and Girl Group Night (yeah, we know boy bands and girl groups go back to the ’60s, but you cannot deny their ’90s peak). With two guest judges — Spice Girl Emma Bunton and ‘N Sync-er and “Dancing” runner-up Joey Fatone — on deck, each couple will have two individual dances.

The remaining six couples will compete in two rounds: Round 1 is Girl Group, judged by Bunton; Round 2 is Boy Band, judged by Fatone. Here are their dances:

Why, yes, Brown did just do the quickstep, so this is yet another typo (#neverforget “jazz Charleston” last week).

Featured songs include The Supremes’ “You Can’t Hurry Love,” Spice Girls’ “Wannabe,” En Vogue’s “Free Your Mind,” The Pointer Sisters’ “I’m So Excited,” Backstreet Boys’ “I Want It That Way,” New Kids on the Block’s “Step by Step” and Jonas Brothers’ “Only Human.” The show will open with a number choreographed by Brooke Wendle and Rodrigo Basurto to some of your favorite BB and GG tracks. And then one couple will say “Bye Bye Bye” at the end of the night. Still no mention of a double elimination yet.