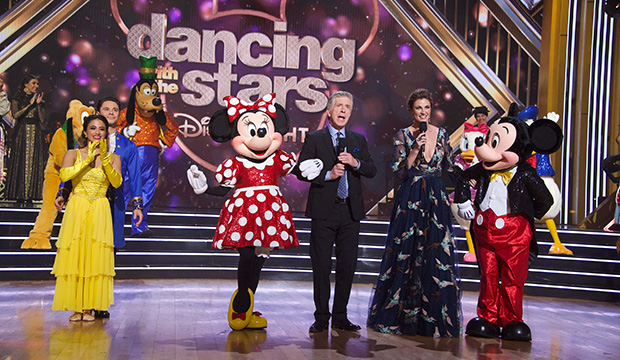 And on the fifth week, the “Dancing with the Stars” judges busted out those 9 paddles. On Monday’s Disney Night, four couples — Ally Brooke and Sasha Farber, Kel Mitchell and Witney Carson, Hannah Brown and Alan Bersten, and James Van Der Beek and Emma Slater — received at least one 9, the highest single point given out so far. That means a perfect 10 is imminent, but who will get it first?

It might be a few weeks before we see a 10 for anyone. The judges have been more exacting with their scoring this season after last season, in which they were a tad too generous to someone like Joe “Grocery Store Joe” Amabile and arguably just in general. Last season, the first 9s were given out on the second week to four couples, and the first 10s went to Juan Pablo Di Pace and Cheryl Burke — for a perfect score of 30 — on the third week. Yeah, way too much, way too soon.

SEE ‘Dancing with the Stars’ recap: Who brought magic to Disney Night?

The judges this season have also been scoring in chunks; multiple couples have come within a point or two of the top scorer every week or in last week’s case, there was a four-way tie for the lead. On Monday, Brooke and Farber topped the night with a 27, while Mitchell and Carson, and Van Der Beek and Slater tied with a 26. Brown and Bersten were on their heels with a 25.

The bunched scoring creates a sense of tight, unpredictable competition with no clear frontrunner — and to be clear, there are a lot of very good dancers this season — so you could really see any of these aforementioned couples becoming the first one to earn a 10. (Also important to remember that whoever cracks that 10 threshold first may depend on the running order, especially if multiple 10s are handed out the same night; Brooke and Farber went fifth this week and were the first to get the 9s.) Even Sailor Brinkley-Cook and Val Chmerkovskiy or Kate Flannery and Pasha Pashkov, both of whom got a 24 on Monday, could do it. Or Lauren Alaina and Gleb Savchenko, who got a 23 but was one of the four top scorers last week.

The only remaining pairs that’ll have a harder time hitting double digits, to put it charitably, are Karamo and Jenna Johnson, who have yet to eclipse a 7, and Sean Spicer and Lindsay Arnold because, well, you’ve seen him dance.