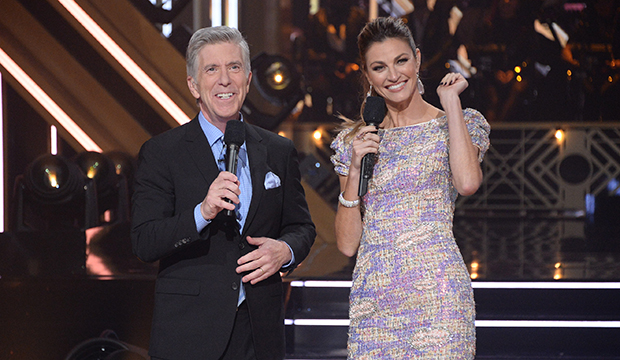 “Dancing with the Stars” won’t return for another nine months, but you can bet the show is already looking at celebrities to lock down for Season 29, including, potentially, another political lightning rod (sigh) and the one that got away this year, Charlie Sheen.

The actor revealed in September that he turned down a spot on Season 28 because he didn’t think he could dance, but Rob Mills, ABC Entertainment’s senior VP of alternative series, specials and late-night programming, isn’t giving up that easily.

“I don’t think it’s a huge secret because he came out and talked about it, but I would still love Charlie Sheen to come on,” Mills told our sister site “Variety.” “I found him to be one of the nicest, most charming people. He is just a born entertainer and I think people would love to see him, but it may not be for him. What I really found very sweet about him is he basically said, ‘I really don’t dance. I’ve got two left feet.’ So there’s a real sweetness and vulnerability, which would be really fun to showcase on the show.”

Mills also has his eye on Pittsburgh Steeler Ryan Shazier. The linebacker suffered a spinal contusion in a head-on tackle during a game in December 2017 that nearly left him paralyzed and hasn’t played since. In May, a video of him dancing at his wedding went viral, 17 months after the devastating injury. “Those are those great stories that are really what ‘Dancing with the Stars’ is all about — here’s somebody who has overcome something, and when you do that, you dance,” Mills said. “He would be great.”

SEE Hardly shocking, but ‘Dancing with the Stars’ won’t return in spring 2020

After landing Karamo on Season 28, Mills would like to see the rest of the “Queer Eye” guys on as well. And then there’s the person who did join last season and had to drop out: Christie Brinkley, who was replaced by her daughter Sailor Brinkley-Cook days before the season premiere after breaking her arm. The supermodel had been a white whale for “Dancing” and Mills would “love to see her back dancing in the ballroom.”

And despite all the backlash and criticism — including from Tom Bergeron — that accompanied the show’s casting of Sean Spicer last season, Mills shares that he “would never say never to someone in politics,” even in a presidential election year. “We would look at anything, potentially, if it were good for the show,” he said.

While many felt that casting Spicer normalized the repugnant and corrupt behavior of the Trump administration, Mills admitted that he didn’t think the controversy would blow up the way it did. “At the end of the day, we’re talking about a ballroom dancing competition — we weren’t asking Sean Spicer to lead a debate or do anything political — but you have to look at the reaction and we saw what people said,” he noted. “I was frankly stunned that people still cared that much about Sean Spicer. I mean, gosh, he had been out of the public eye for about a year. But clearly I was wrong.”