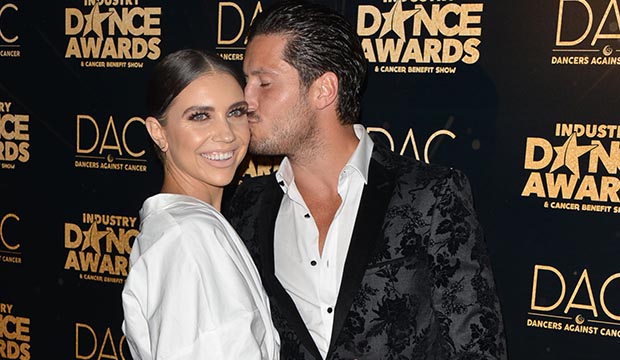 “Dancing with the Stars” pros Val Chmerkovskiy and Jenna Johnson will tie the knot later this year, and you can bet some of their old partners will be at their big day. And they’re pretty obvious ones.

Johnson already shared last year that Adam Rippon, with whom she won the “Athletes” season, will be a bridesman in her bridal party. But now she’s revealed to “Entertainment Tonight” (watch below) that Joe “Grocery Store Joe” Amabile will be also a guest, with his “Bachelor in Paradise” girlfriend Kendall Long as his plus one.

As you probably recall (but might want to forget), Johnson and Grocery Store Joe made it all the way to the semifinals last season despite his two left feet and abysmal scores. The two have remained friends since the season ended in November. Johnson’s only other “Dancing” partner was Jake T. Austin in Season 23; they were the first couple eliminated.

Chermovskiy has had far more partners than his betrothed — 14 total — and three of them have RSVP’d: Rumer Willis, Laurie Hernandez and Normani Kordei. He won his two Mirrorball trophies with Willis (Season 20) and Hernandez (Season 23), and was a favorite to win Season 24 with Kordei, but they surprisingly came in third place.

“We want to keep a small guest list, but at the same time, it’s a beautiful thing that we’ve built real sincere, genuine relationships,” Chmerkovskiy said of their guest list. “And the number grows, but it doesn’t from like a shallow standpoint of having everybody there that we know. It’s growing because we realize, ‘Wow! There’s a lot of people that mean a lot to us in our life.'”

There will be other “Dancing” folk there of course, including fellow pros, like Chmerkovskiy’s brother Maksim, who will be his best man, returning the favor from when Val was Maks’ best man at his wedding to Peta Murgatroyd. Shai, Murgatroyd and Maks’ 2-year-old son, will also be part of the ceremony.

Chmerkovskiy and Johnson got engaged last June, which made 2018 very memorable for her, but apparently not for him.

It’s unclear if either will be on Season 28 this fall, but if they say “I do” over the summer and they do return, you can bet we’ll be hearing all about the wedding on the show.