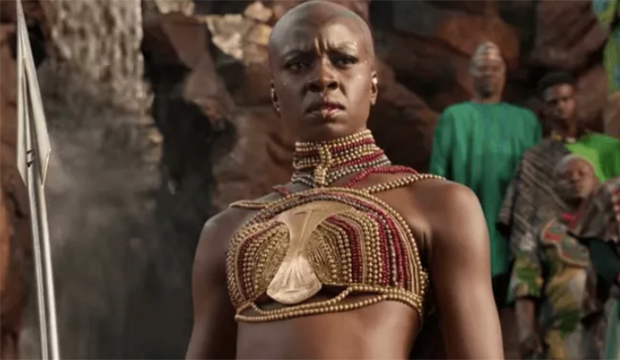 Dania Gurira edged out her three female co-stars from “Black Panther” — Letitia Wright, Lupita Nyong’o and Angela Bassett — as the one most deserving of an Oscar nomination for Best Supporting Actress. In our recent poll, 47% of fans voted for Gurira for her portrayal of Okoye, a fierce warrior and a proud Wakandan and traditionalist from the Border Tribe. Wright, who plays Shuri, came second with 28% of the total tally; Nyong’o, who plays Nakia, was third with 14%; and Bassett, who plays Ramonda, got 11%.

Okoye is the head of the Dora Milaje, Wakanda’s all-female special forces, and T’Challa’s bodyguards. Gurira has a striking presence in the picture and the physicality she demonstrates in her fight scenes is both impressive and frightening.

Wright’s Shuri is Q to Black Panther’s James Bond. Her character’s expertise in technology is fascinating and she brightens up the screen with her sense of humor and playfulness. The actress clearly has a lot of fun in this role and fans reacted to this character in a very positive way, suggesting she could one day be the successor to Robert Downey Jr.‘s Tony Stark/Iron Man.

Oscar-winner Nyong’o (Best Supporting Actress for “12 Year a Slave,” 2014) is Nakia, the one-time lover of T’Challa/Black Panther (Chadwick Boseman) and a spy from the River Tribe. As T’Challa’s love interest, Nyong’o has a fair amount of screen time and her stoic performance is notable.

Bassett was Oscar-nominated in 1994 for Best Actress for her riveting portrayal of Tina Turner in “What’s Love Got to Do With It.” She lost that race to Holly Hunter in “The Piano” and is certainly overdue for further recognition by the academy. Here, she is Ramonda; T’Challa and Shuri’s mother, the Queen Mother of Wakanda. Ramonda serves as an adviser to T’Challa when he would otherwise have turned to his father. Bassett is a commanding figure in the film. Her recent success with “American Horror Story” could remind voters of her versatility.

Which actress do you think is most deserving of a Best Supporting Actress nod, or even a win? Let us know what you think in the comments section below.