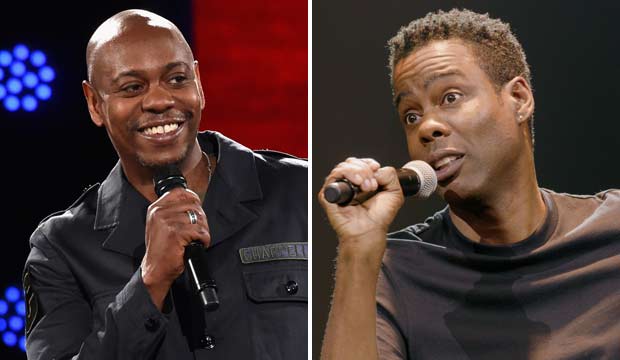 Dave Chappelle and Chris Rock have won a combined four Grammys for Best Comedy Album with no losses. But at least one of them will see his winning streak end this year since they’re nominated against each other for the first time. Will one of them prevail, or will they both be handed their first loss?

Chappelle earned his very first nomination just last year for “The Age of Spin and Deep in the Heart of Texas.” He won that prize, and now he’s nominated again for “Equanimity and The Bird Revelation.” The nominated album is taken from a pair of Netflix specials that premiered on the streaming service in December 2017. And one of them has already won him an Emmy: “Equanimity” was awarded Best Variety Special (Pre-Recorded) a few months ago. That was his second Emmy in as many years (following a guest-acting prize for “Saturday Night Live” in 2017), and now he could go two-for-two at the Grammys too.

Rock’s winning streak started two decades ago, and it has been more than a decade since he last contended at these awards. He won this prize for “Roll with the New” (1998), “Bigger and Blacker” (2000) and “Never Scared” (2006). Now 13 years later he’s up for “Tamborine,” which is also taken from his Netflix special of the same name. Fun fact: the special was directed by current “Eighth Grade” Oscar contender Bo Burnham, though Burnham won’t take home a trophy if Rock wins here.

Chappelle and Rock aren’t the only Grammy favorites in contention this year. Patton Oswalt is nominated for his own Netflix stand-up special “Annihilation,” which is his fifth Grammy bid. He finally won this award on his fourth try two years ago for “Talking for Clapping.”

SEEWill Bjork FINALLY win a Grammy, or lose for the 15th time?

Jim Gaffigan has also been a frequent Grammy bridesmaid. He’s nominated for the Comedy Central special “Noble Ape,” which is his fourth album to earn a bid here in the last six years, but he has yet to win.

Rounding out the category is this race’s only first-timer: “SNL” and “Portlandia” alum Fred Armisen for “Standup for Drummers” from — you guessed it — his Netflix special. Could he have the same kind of beginner’s luck Chappelle had last year? Perhaps he’ll be the next undefeated Grammy winner.