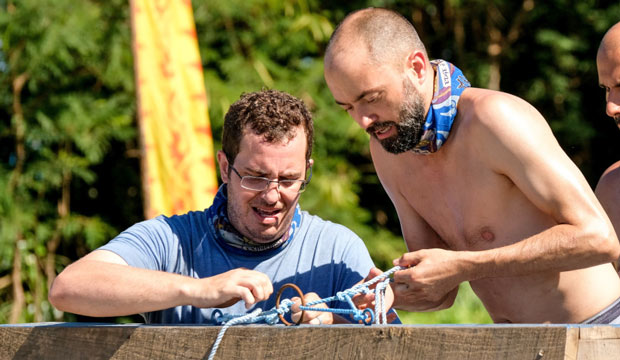 If you told me a week ago that David Wright and Rick Devens would be feuding on “Survivor: Edge of Extinction,” I would have accused you of lying. So far this season David and Rick have been the best of friends, voting with each other 100% of the time at tribal council and rooting for each other at challenges. Heck, Rick even gave David half of his heart immunity idol after he returned from Extinction Island. So what happened?

During Wednesday’s eighth episode David and Rick were approached by former Lesu tribe members Kelley Wentworth and Dan “Wardog” DaSilva, respectively, about burying the hatchet and joining forces to try to compete with the dominant Kama alliance. David’s past “Survivor” experience has taught him to always look for ways to make it further in the game, so he agreed to Kelley’s plan, but Rick’s inability to get over the fact that these folks previously voted him out caused him to basically spit in Wardog’s face

SEEEric Hafemann (‘Survivor’ 38) exit interview: ‘They got me pretty good,’ he confesses after blindside

“I don’t want to get back with you guys at all. You guys tried to vote me out twice. Why would I work with you guys?” Rick asked a dumbfounded Wardog. That’s when Wardog rolled his eyes and accused Rick of playing with his emotions. Which was true.

When David and Rick later compared notes, David tried to get his buddy on their side. “Going the way you’re going, I’m a puppet and you’re a puppet,” he told Rick about how they’d be at the bottom of the totem pole if they joined the seven-person Kama alliance. “We [would not be] driving this game. Eric Hafemann‘s driving it and Ron Clark‘s driving it.”

Rick replied that his way seemed better “for me,” because there was no way David was going to acquire enough numbers to change the vote. “I think you’re dreaming,” Rick stubbornly stated. That’s when Rick asked for the other half of the immunity idol back that he had given David the previous week. But David wasn’t interested, replying, “If you don’t mind, I’d like to hang on to it.” Ouch!

Sure enough, at tribal council Rick ended up voting with the minority while David’s plan worked out and Eric was sent to the Edge of Extinction. Do you think the “Survivor” bromance between David and Rick is officially donezo? Or can their friendship still be saved? Vote in our poll below.