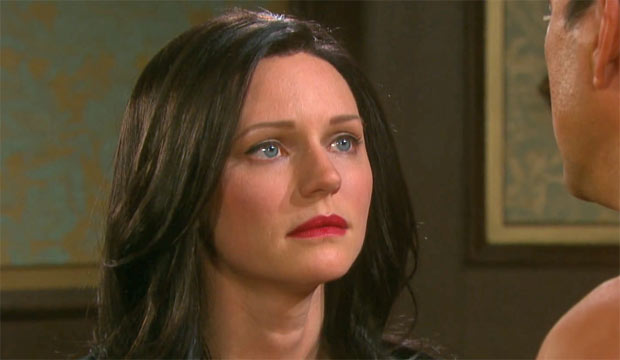 Marci Miller (“Days of Our Lives”) earned her second straight Best Actress nomination at the Daytime Emmys this year for her performance as Abigail Deveraux. But this may be her last chance to win since she left the series last fall. In fact, two actresses could win Emmys this year for the role since Kate Mansi is up for Best Guest Performer for stepping back into the character’s shoes at the end of the year. It would be fitting if multiple actresses prevail on one night since Abigail had multiple personalities last year.

Will Miller get a nice parting gift from the television academy? The nominees and winners for these awards were both decided in one round by blue ribbon panels judging sample performance reels. Those reels weren’t released publicly this year, but they were made available to the press. So here’s the scoop on what Miller entered for consideration.

Synopsis: The reel focuses on Abby’s struggle with DID: dissociative identity disorder, commonly known as multiple personality disorder. The opening scene shows Abby horrified when she remembers that she killed Andre DiMera (Thaao Penghlis), at which point one of her alternate personalities, Dr. Laura, arises to explain to Chad (Best Actor nominee Billy Flynn) that Andre’s death was the moment Abby’s mind fragmented.

Next we get a peek inside Abby’s mind as she splits off into her other alter, Gabby, a devious villain she creates to hold onto the memory of killing Andre. Gabby then taunts her lover Stefan (Best Actor nominee Tyler Christopher) while trying to frame him for Andre’s murder. And after that is another scene in Abby’s mind as Dr. Laura and Gabby battle for control. At last we see Abby in a therapy session with Dr. Marlena Evans (Deidre Hall), at which points Dr. Laura emerges to explain to Marlena that Abby isn’t ready to hear that she has DID.

Pros: Multiple personalities often pay off at the Daytime Emmys because they give actors the opportunity to demonstrate considerable dramatic range. David Canary (“All My Children”) won five Emmys for playing twins. Anthony Geary (“General Hospital”) won one of his eight Emmys for playing Luke Spencer and his evil doppelganger. Erika Slezak (“One Life to Live“) won six Best Actress Emmys, and her most famous storyline involved a struggle with DID, just like Miller. The three personalities showcased here are drastically different: Abby is traumatized and sympathetic, Dr. Laura is cold and rational, and Gabby is hot-headed and cunning. So voters can see a broad spectrum of Miller’s dramatic capabilities.

Cons: Many of these scenes are abstract, taking place within the mind, and voters may prefer more straightforward dramatic scenes. We also see quite a lot of Dr. Laura and Gabby, who are more emotionally contained than Abby, so apart from the initial scene of Abby learning the truth about killing Andre, Miller doesn’t get to display as many big emotional fireworks as her competitors.