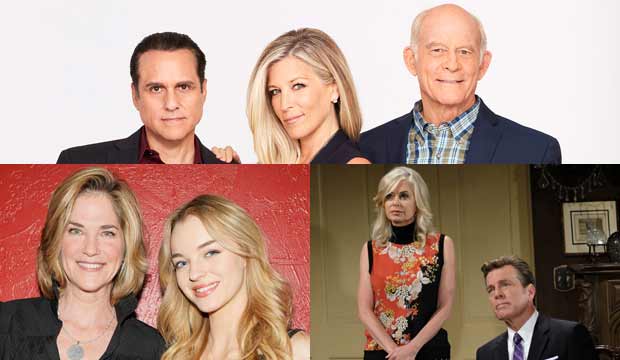 “Days of Our Lives” is the most nominated program of the year at the Daytime Emmys with 27 bids, and it’s the front-runner to win Best Drama Series for the second year in a row according to the combined predictions of hundreds of Gold Derby users who have made their forecasts here in our predictions center. But nothing is set in stone. The Daytime Emmys are decided based on sample episode submissions, which are the great equalizer, so watch out for a big upset.

“Days” submitted an episode in which Abigail (Best Actress nominee Marci Miller) fights against her alternate personality Gabby in her own mind, and then another episode in which Lani (Sal Stowers) imagines the life she might have led while undergoing an emergency C-section.

“General Hospital” submitted an episode in which the town reacts to the death of Detective Nathan West (Ryan Paevey). The second episode takes place during the annual Nurses’ Ball, during which a number of storylines converge, including Mike (Best Supporting Actor nominee Max Gail) and his worsening Alzheimer’s disease, Maxie (Kirsten Storms) going into labor, Kiki (Best Younger Actress nominee Hayley Erin) being sexually harrassed, and a search for Henrik Faison (Wes Ramsey).

“The Young and the Restless” submitted the episode in which Victoria (Amelia Heinle) and a group of her friends and family end up killing Victoria’s abusive ex JT (Thad Luckinbill). The second episode focuses on the revelation that Ashley (Eileen Davidson) faked the paternity test that seemed to show that her brother Jack (Best Actor nominee Peter Bergman) wasn’t really the son of the late John Abbott.

And “The Bold and the Beautiful” entered two episodes of building tensions leading up to the moment when someone shoots Bill Spencer (Don Diamont), but who was it?

Our forum posters have been discussing these submissions, and they think “GH” and “Y&R” are best positioned to overtake “Days.” It would be the 14th win for “GH,” which would extend that show’s all time record. It would be the 10th victory for “Y&R,” which would make it only the second soap ever to hit double digits. What do you think? Read some of our forum posters’ comments below, and join the discussion here.

SoapFan88: “‘GH’ or ‘Days’ for the win! I’m pulling for ‘GH’ because I think their submissions are much better, despite the fact that ‘Days’ had a better year start-to-finish. The Nurse’s Ball in particular this year was so brilliant, Sonny and Mike’s performance was so touching and [Maura West] brought the house down!”

VinceT: “‘GH’ has never won in the Drama Series category when they pick the Nurses’ Ball as their second episode … If ‘GH’ pulls off the 14th Drama Series win, it will be on the strength of the first episode. And it was the best hour on daytime last year.”

FreemanGriffin: “These two submissions are Emmy gold and I wouldn’t be at all surprised if ‘Y&R’ wins. It’s so close between ‘GH’ and ‘Y&R,’ they are the two best submissions this year.”