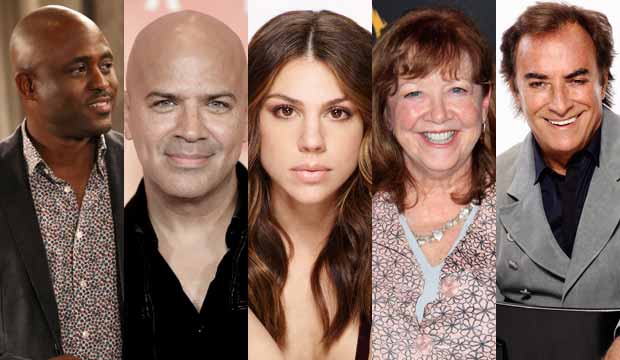 The Daytime Emmys revived the category of Best Guest Performer in 2015 almost 30 years after it had last been handed out in 1987, but a new rule instituted this year could be highly consequential. In the last four years this award was restricted to actors playing newly created roles, but this year the academy opened it up to established characters as well. This year there are two returning roles in the running: Kate Mansi as Abigail Deveraux and Thaao Penghlis as Andre DiMera, both from “Days of Our Lives.” Both have been Emmy contenders before for these roles (and Mansi was a winner), so does that give them an advantage?

That depends on their Emmy reels. These awards are unique in that both the nominees and the winners were determined by blue ribbon panels viewing sample performance reels from the actors up for consideration. Those submissions tend to level the playing field, so here’s the scoop on what this year’s guest stars submitted to voters.

Philip Anthony-Rodriguez, “Days of Our Lives” (Run time: 9:07) — Miguel Garcia (Anthony-Rodriguez) introduces himself to Chloe (Nadia Bjorlin) as a representative of the wealthy Mateo, who wants to fly her to Mexico and finance an opera for her to star in. After she refuses, Miguel kidnaps her on his behalf. Eventually, Mateo kills Miguel for allowing Chloe to use his cell phone. Anthony-Rodriguez’s performance is charming and debonair, making it convincing that Chloe would consider his offer at first. However, there isn’t much character development for Miguel, whose main function is to carry out Mateo’s nefarious orders. So there aren’t many emotions for the actor to play.

Patricia Bethune, “General Hospital” (Run time: 12:25) — Mary Pat (Bethune) is a nurse at Ferncliff, the mental hospital where Carly (Best Actress nominee Laura Wright) is being held, but we quickly see that Mary Pat sadistic and controlling, invading Carly’s privacy and drugging her excessively. We later see her with a man she believes is Kevin Collins but is actually his evil twin brother Ryan Chamberlain (Best Actor nominee Jon Lindstrom). She tries to blackmail him, but she has no idea that he’s about to murder her.

This is a juicy villain role, and veteran character actors like Bethune have done well in this category (Ray Wise for “The Young and the Restless,” Jim O’Heir for “The Bold and the Beautiful”), but this isn’t an especially showy performance. Mary Pat is subtly sinister, so Bethune doesn’t get to chew as much scenery as voters might like her to.

Wayne Brady, “The Bold and the Beautiful” (Run time: 10:14) — Dr. Reese Buckingham (Brady) arrives to visit his daughter Zoe (Kiara Barnes) and admits he has not always been there for her. But he finds himself drawn to Taylor (Hunter Tylo). He flatters her, flirts with her and defends her, but the way he reacts to her wealth suggests he has ulterior motives.

Brady is beloved by the television academy with five Emmys across primetime and daytime as a variety performer, game show host, talk show host and songwriter. So underestimate him at your peril. But we learn more about Taylor from these scenes than we do about Reese, so Brady doesn’t get to show off his full range of comedic and dramatic abilities.

Kate Mansi, “Days of Our Lives” (Run time: 14:03) — Mansi won an Emmy for playing Abigail in 2017, after which current Best Actress nominee Marci Miller took over the role. But then Miller decided to leave the show, so Mansi stepped back into Abigail’s shoes for a few months starting near the end of 2018, which brings her back to the Emmy race. Mansi submitted scenes in which Abigail is furious at Chad (Best Actor nominee Billy Flynn) for locking her back up in a mental hospital. Then she pretends to be her alternate personality “Gabby” to manipulate Stefan (Best Actor nominee Tyler Christopher) into getting her released. Finally she is in her Gabby persona when she confronts the real Gabi Hernandez (Camila Banus).

This is the longest reel in the category, and it’s full of so much dramatic impact and range she would have been competitive with these scenes even in the lead actress race. She’s angry, desperate, devious, manipulative and vengeful. It’s a veritable acting feast. It’s possible, though, that voters will be hesitant to reward Mansi for the role Miller had played all year.

Thaao Penghlis, “Days of Our Lives” (Run time: 4:42) — Penghlis reprises his role as the dead Andre DiMera for scenes that take place in Abigail’s mind. At this point Abigail was played by Miller as she tries to suss out who really killed Andre. She gets closer and closer to the realization that she was actually the killer. The last brief scene takes place in the real world, where he declares his love to Kate (Lauren Koslow). This is one of the more dramatically hefty reels, and Peghlis has a proven track record at the Emmys, having been nominated for Best Actor in 2008. However, this is the shortest reel in any acting category, and voters might hold it against him that the character he’s playing is mostly a figment of someone else’s imagination during these scenes.