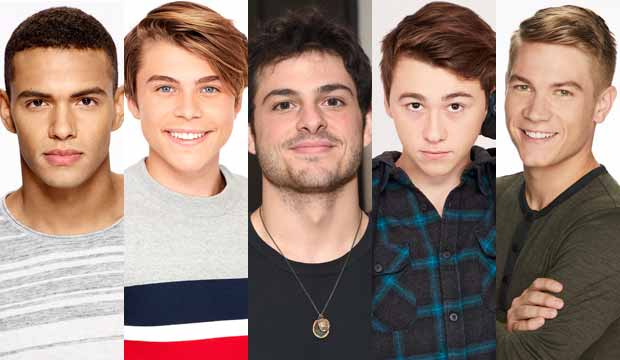 Last year’s Daytime Emmy race for Best Younger Actor ended in an upset when Rome Flynn (“The Bold and the Beautiful”) defeated the overwhelming favorite, Casey Moss (“Days of Our Lives”). Will this year’s race be just as surprising? There’s only one returning nominee in the category (“Days” star Lucas Adams), who is joined by four newcomers. It’s the only acting race this year guaranteed to crown a first-time winner. So who’s out front?

The Daytime Emmys are unique in that the nominees and winners are both decided in a single round of voting during which blue ribbon panels viewed sample performance reels from the nominees. The academy made those reels available to the press, so here’s the scoop on all the Younger Actor contenders at this year’s kudos so you can make informed predictions here in our predictions center before this weekend’s show.

Lucas Adams, “Days of Our Lives” (Run time: 7:55) — This reel focuses on the crumbling relationship between Tripp (Adams) and Ciara (Best Younger Actress nominee Victoria Konefal). In the first scene, Ciara confronts Tripp after finding out that he tried to frame Ben (Robert Scott Wilson) for a crime he didn’t commit. In the second scene, Tripp moves out after they argue again about Ben. This reel is entirely a two-hander between Adams and Konefal, which gives Adams ample time to delve into his character and relationship. It’s a complex emotional performance, blending Tripp’s resentment of Ben with his heartbreak over losing Ciara, and he keeps our sympathy despite his scheming because Ben, after all, is a literal serial killer. But these two scenes convey similar emotions, so they don’t afford Adams much opportunity to demonstrate his full range as an actor.

William Lipton, “General Hospital” (Run time: 11:32) — The entire reel focuses on Cameron (Lipton) and Josslyn (Best Younger Actress nominee Eden McCoy). It begins with Cameron and Josslyn having a lighthearted moment together as they pretend to be a couple to make Oscar (fellow Younger Actor nominee Garren Stitt) jealous, but then Cameron reveals the secret he’s been keeping that Oscar is dying of a brain tumor. Josslyn is angry that she was lied to, but Cameron is angry that Oscar and Josslyn put him in the middle. Lipton is helped by the fact that this reel presents a single story arc with a consistent emotional through line that allows him to play highs and lows, sweetness and bitterness. But these scenes may be an even better showcase for his co-star McCoy, who submitted some of these scenes on her own Emmy reel.

Kyler Pettis, “Days of Our Lives” (Run time: 6:57) — Theo (Pettis) is in the hospital trying to decide whether he should go to South Africa to pursue medical treatment. At first he resists, but he finally agrees, so he says goodbye to his family and friends before leaving the hospital and leaving Salem for good. These are emotional scenes and they have a strong payoff as Theo cries during his final farewells, but it’s actually his co-stars who drive the emotions of these scenes since Theo isn’t as outwardly expressive a character (it’s not referenced directly in these scenes, but Theo is autistic). And these scenes are from Theo’s farewell storyline back in January 2018, so the character may be out of sight, out of mind for voters.

Garren Stitt, “General Hospital” (Run time: 13:29) — The reel begins with Oscar (Stitt) being confronted by his girlfriend Josslyn, who just found out his secret: he’s dying of brain cancer. We then see the moment he learned that truth from his parents (Tamara Braun and Billy Miller), who had been keeping it secret from him. He’s angry with them for hiding the truth, and he’s even more furious when his mother tells him she has known about his condition for years. This is certainly the most dramatic reel in the category with the highest stakes and the biggest emotions. It’s especially effective when Oscar talks about the life he’ll never have and collapses from fear in an elevator. It’s also the longest reel, so he has a great chance of winning, but he too runs the risk of his female co-stars pulling focus away from him, and it maintains the same tone throughout, so it doesn’t display as much emotional range.

Zach Tinker, “The Young and the Restless” (Run time: 13:25) — Fenmore (Tinker) gives his parents (Christian LeBlanc and Tracey E. Bregman) some surprising news: he’s quitting law school to pursue a music career. Then he clashes with eager young producer Ana (Loren Lott) but eventually records a song they both love. In the last scene Fenmore apologizes to Ana for his poor behavior, and they agree to work together. Tinker is a charismatic presence throughout the reel, but this storyline has relatively low stakes (no secret cancer or serial killers, just a music demo), so it doesn’t give Tinker a chance to sink his teeth into meaty emotional material. If anything, it’s Ana who has the more dramatic arc as she tries to prove herself to her big brother Devon (Best Supporting Actor nominee Bryton James).

Without any previous winners in this category and only one previous nominee, it’s hard to rule anyone out completely, but from the submitted reels this looks like it might be a two-way race between Adams’s two-hander breakup scenes and Stitt’s dramatic cancer reveal. What do you think?