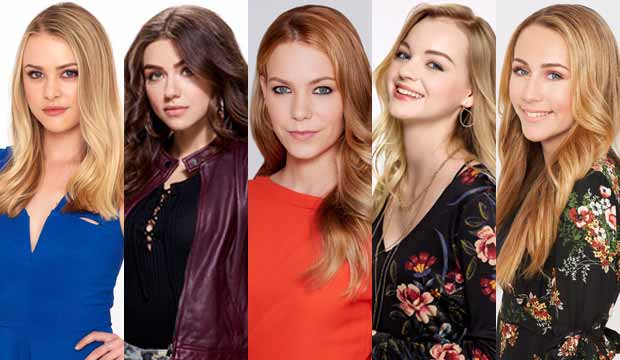 Perhaps surprisingly, there are only two soaps represented in the Daytime Emmy race for Best Younger Actress, with three “General Hospital” ingenues going up against two from “Days of Our Lives.” But who has the upper hand? Chloe Lanier (“GH”) is the defending champ, but her four rivals this year could give her a run for her money.

The Emmy nominees and winners were both decided in a single round of voting by blue ribbon panels that viewed sample performance reels from each actor. Those reels were made available to the press, so here’s what you need to know about these five contenders when making your predictions for this weekend’s show here in our predictions center.

Hayley Erin, “General Hospital” (Run time: 11:02) — About half of this reel consists of angry confrontations between Kiki Jerome (Erin) and her mother Ava (Best Actress nominee Maura West) regarding their love triangle with Griffin (Matt Cohen). The other half features a timely storyline in which Kiki, a nurse at General Hospital, is being sexually harassed by her superior. The most impactful moment on the reel comes when Kiki is on the witness stand testifying in detail about the harassment. Overall, the reel gives the actress plenty of dramatic range, from angry to afraid to righteously defiant, and the witness stand scene may resonate strongly with voters in the #MeToo era, though some of these scenes are fairly short and don’t give the viewer or actress a lot of time to settle in.

Olivia Rose Keegan, “Days of Our Lives” (Run time: 7:58) — Claire (Keegan) is devious in this reel, which includes scenes in which she tries to convince Ben (Robert Scott Wilson) to help her break up Tripp (Best Younger Actor nominee Lucas Adams) and Ciara (fellow Best Younger Actress nominee Victoria Konefal). But Keegan also shows Claire’s softer side in scenes in which she bids farewell to Theo (Best Younger Actor nominee Kyler Pettis), who is leaving town for medical treatment. Villainous women have won this race before (from “All My Children’s” Sarah Michelle Gellar to “GH’s” Lanier), and Keegan effectively shows the light and dark sides of her character, but the reel doesn’t have a big, cathartic moment that would seal the deal.

Victoria Konefal, “Days of Our Lives” (Run time: 10:56) — The reel opens with its most powerful scene, in which Ciara (Konefal) is counseled by Kayla (Mary Beth Evans) about a rape she experienced in the past and how it affects her current relationship. We also see her confronting Rafe (Galen Gering), who cheated on her mother. The rest of the scenes are between Ciara and Ben, first when she talks him down from a psychotic break and then when they flirt over motorcycle repair. She’s incredibly sympathetic, and the opening scene is an especially strong performance showcase, though her initial scene with Ben is more about him than it is about her, and the motorcycle scene doesn’t give her any emotional fireworks to play, though it does contrast nicely with the tone of the rest of her submission.

Chloe Lanier, “General Hospital” (Run time: 6:33) — Lanier schemes through her reel as Nelle Benson. First she taunts Carly (Best Actress nominee Laura Wright) about her history of mental illness, then she tries to convince Harrison Chase (Josh Swickard) to kill her husband Michael (Chad Duell). She also implicates Ava (Best Actress nominee Maura West) in her crimes and fakes her baby’s death by giving him away. But at the end Michael confronts her with her misdeeds (well, the ones he knows about anyway) while she begs for forgiveness. This reel runs the gamut with a wide variety of emotional layers for Lanier to play. It’s even more dramatic than the one she won for last year, so she stands a great chance of repeating, but this is the shortest reel in the category, so there’s a chance voters will pick a nominee who showcases more material.

Eden McCoy, “General Hospital” (Run time: 10:36) — In the opening scene, Josslyn (McCoy) is angry at her boyfriend Oscar (Best Younger Actor nominee Garren Stitt) because he is reluctant to sleep with her. The rest of her reel shows her dealing with the discovery that Oscar may be dying of a brain tumor. She’s front and center throughout, and these scenes are chock full of impactful moments, especially when she first learns the truth about why Oscar pushed her away. But the emotions expressed in these scenes are more or less consistent, so this reel doesn’t demonstrate as much of her emotional range as her rivals.

Who do you think has the best chance of winning? Voters often love repeat winners in this category, but the door is open for one of Lanier’s opponents, especially with the scenes submitted by Erin, Konefal and McCoy. This one is going to be close.