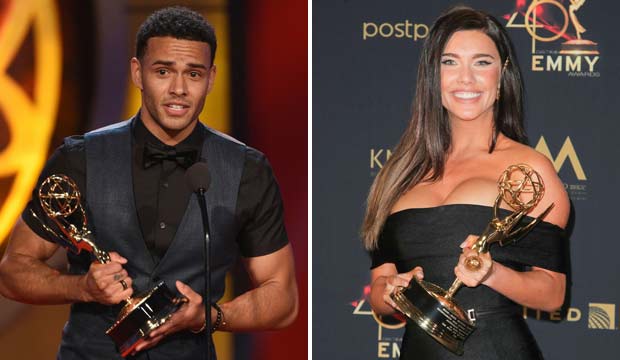 The 2019 Daytime Emmys were chock-full of surprises, from the very beginning when Kyler Pettis (“Days of Our Lives”) upset his co-star Lucas Adams, to the very end when “The Young and the Restless” overtook top nominee “Days of Our Lives” to claim Best Drama Series. Our forum posters sounded off about to the show throughout the night. Join the discussion here, and you can find out who won every category on Sunday night right here.

“Y&R” ended up winning the trifecta of program awards: Best Drama Series, Best Writing Team and Best Directing Team. That along with Jacqueline MacInnes Wood‘s surprise Best Actress victory for “The Bold and the Beautiful” “made my night,” according to linecelts. MacInnes Wood’s victory made alokin “thrilled beyond words.” FreemanGriffin, however, had … other thoughts, calling these the “worst Daytime Emmys ever.”

What did you think? Read some of our posters’ comments below and battle it out with them here.

linecelts: “‘Y&R’s’ trifecta wins and Jacqueline MacInnes Wood winning Lead Actress made my night. I kept telling some of you that I had a feeling there was going to be an upset in Lead Actress and I was RIGHT. Really felt bad for ‘Days’ but was happy for Kyler Pettis winning.”

alokin: “Jacqueline MacInnes Wood! She did it! Hallelujah! I’m crying so many happy tears right now! Thrilled beyond words! Thank you, Emmy Gods! Best Emmys ever! … ‘Y&R’ completes the Trifecta!!! Huge congrats!!! After dominating the Creative Arts Emmys, I took that to mean they likely wouldn’t take home the big prize. What another historic Emmys!”

SoapFan88: “Maura West (and Kassie DePaiva or Beth Maitland, for that matter) not winning this award and the reels not being released this year conclusively proves that this process is entirely corrupt. Let’s hope they get it right in 2020. That woman is undoubtedly the best thing on daytime right now.”

StallionCity: “I don’t know how Maura lost! She had the single most chilling scene in all of 2018 across all dramas. She should have gotten Emmy #4!”

montana82: “Kathie Lee finally wins for HOST! Rachel Ray continues streak of winning Show but not host. Thankfully she got an Emmy this time for her show as a producer.”

syrus80: “What a complete mess this year! Kyler and Kathie Lee are the only wins I liked!”