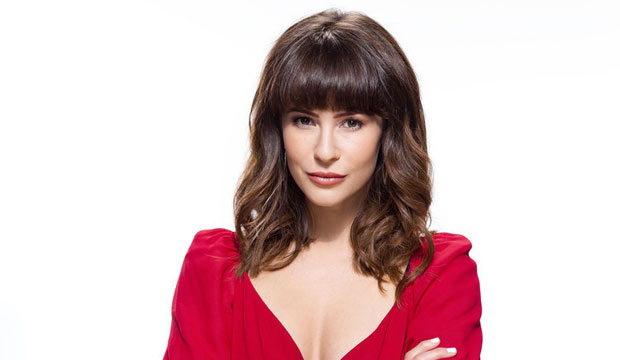 Linsey Godfrey only started appearing as Sarah Horton on “Days of Our Lives” last fall, but the actress has already earned a Daytime Emmy nomination for Best Supporting Actress. This is Godfrey’s third nomination in this category and fourth nomination overall. She contended for this award in 2015 and 2016 for playing Caroline Spencer on “The Bold and the Beautiful,” and in 2014 she was up for Best Younger Actress for that role.

The nominations and winners for these awards were decided in a single round of blue ribbon judging when panels viewed sample performance reels from each actor. Those reels weren’t made available to the public this year, but they were available to the press. Here’s what you need to know about the scenes Godfrey submitted.

Synopsis: The reel opens with Sarah discovering — at her engagement party no less — that her fiancee Rex (Kyle Lowder) has fathered a child with his ex-girlfriend Mimi (Farah Fath). Later she rages at Rex for his betrayal and asks him if he only cheated on her once. Rex hesitates, suggesting that he cheated multiple times, and Sarah slaps him. Despite Rex’s pleas for forgiveness, Sarah vows that she will never be able to get over his betrayal, especially with his child as a constant reminder.

We then see Sarah drinking with Rex’s brother Eric (Greg Vaughan). As Sarah continues to badmouth Rex, she notices a newly engaged couple at another table. An inebriated Sarah staggers over to the couple and proceeds to warn the woman that her fiance will inevitably cheat on her. Eric pulls Sarah away as she throws a drink in the confused man’s face. Sarah insists she was acting in the woman’s best interests, then runs off because she’s about to throw up.

Pros: In the early scenes of the reel, Godfrey delivers a master class in soap opera rage, filled with tears, slaps, and vengeful diatribes. It’s the type of dynamic performance that often appeals to Emmy voters. The latter scenes in the bar also show off Godfrey’s range, providing her with increasingly intoxicated moments that alternate between comic and dramatic.

Cons: Although we initially feel sympathy for Sarah, the latter half of the reel doesn’t necessarily show Sarah in her best light. First she bashes Rex to his own father Roman (Josh Taylor), and then tries to break up a happy couple for no good reason. Voters may not feel for Sarah’s plight by the end, seeing her more as a lush than as a woman scorned.