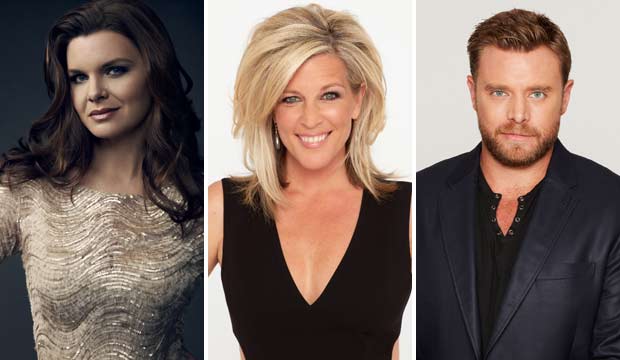 After the 2019 Daytime Emmy nominations were announced our forums poster DS0816 went back in time to see which actors ruled the awards this decade since this is the last year of the 2010s. They discovered that five actors are tied as the most nominated stars of the last 10 years: Peter Bergman (“The Young and the Restless”), Scott Clifton (“One Life to Live” and “The Bold and the Beautiful”), Billy Miller (“Y&R” and “General Hospital”), Heather Tom (“B&B”) and Laura Wright (“GH”) have all been nominated six times since 2010, but not all of them have won.

Clifton and Miller are the only two who spread their nominations between two different roles. Clifton has been nominated a total of nine times in his career, starting with three bids in the 2000s for his breakthrough performance as Dillon Quartermaine on “GH.” Then in 2010 he was nominated for playing Schuyler Joplin on “OLTL.” But he didn’t win his first Emmy until he joined the cast of “B&B” as Liam Spencer. That performance alone brought him five nominations (2011, 2013-2015, 2017) and three wins (Younger Actor in 2011, Supporting Actor in 2013, Lead Actor in 2017). He’s currently the only male actor in Emmy history to have won all three of those races.

Most of Miller’s nominations were for playing Billy Abbott on “Y&R.” Like Clifton, he contended five times for that role (2010, 2011, 2013-2015) and won three: Supporting Actor in 2010 and 2013, and Lead Actor in 2014. Miller and Clifton actually both won supporting honors in 2013 in a rare tie. After leaving “Y&R” Miller joined the cast of “GH” as Jason Morgan, who was eventually revealed to be Jason’s secret twin brother Drew Cain. He earned a Best Actor bid for that role in 2018.

Tom earned all six of her nominations this decade for playing Katie Logan on “B&B,” but that’s just the tip of the iceberg when you consider her whole career. Over the last 29 years in daytime she has earned a whopping 18 nominations across three different soaps, and she shares a particular Emmy achievement with Clifton. She was the first actor of any gender, and is still the only female actor, to win as a younger, supporting and lead actress. She prevailed twice in the Younger Actress race for “Y&R” (1993, 1999). Then she had to wait more than a decade for her Supporting Actress win for “B&B” (2011), and right after that she won Lead Actress back-to-back (2012-2013). She’s nominated again this year, and if she wins her sixth Emmy she’ll tie Erika Slezak as the most awarded soap actress in history.