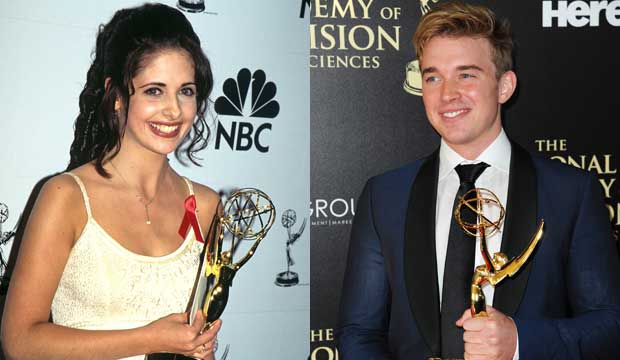 It was recently reported that the Daytime Emmys were considering changes to its younger acting categories in 2020. With only four soaps left on the air, the national television academy may merge Best Younger Actress and Best Younger Actor into one gender-neutral category that would incorporate broadcast soaps as well as digital dramas. Our readers have strong feelings about that. Scroll down to read comments from our forum posters and to see our complete poll results.

Our poll was pretty decisive. Almost two-thirds of respondents (63%) said the Daytime Emmys should keep the younger acting categories just the way they are. Only about a quarter of readers (26%) think the categories should be merged, while the last 11% think the categories should be eliminated altogether. But the responses from the devoted soap watchers in our forums was more divided. Not many of them agree with this particular change, but some agree with the poll respondents who want younger actors and actresses to compete in lead and supporting categories with everybody else.

They may have a point. The Daytime Emmys are a pretty level playing field since all pre-nominees are judged based on sample performance reels, so younger stars have prevailed multiple times against more seasoned veterans. For instance, Chad Duell (“General Hospital”) lost his three nominations as a younger actor before he turned 26 (2011,2012, 2014), but then he won as a supporting actor when he was 27 (2015). Scott Clifton (“The Bold and the Beautiful”) won as a younger (2011), supporting (2013) and lead (2017) actor in the span of just six years. And Jacqueline MacInnes Wood (“B&B”) just won Best Actress at age 32 after previously losing in younger (2012-2013) and supporting (2018) categories. So maybe age really is nothing but a number.

What do you think? Read some of our forum posters’ comments below, and join their discussion here.

SEEBrandon Barash (‘Days of Our Lives’) on Stefan and Gabi’s love affair: ‘There’s obviously something between them’ [LISTEN]

Jw79bull: “I mean this make sense. Less fillers, and maybe we can get a solid 8-9 people nominated next year.”

FreemanGriffin: “I am against this 100%. It’s a slippery slope, look at what has happened with the Grammys, combining male and female vocal categories. Eventually they will decide to combine the lead and supporting acting categories too.”

PoweR: “Why not just get rid of the entire category, and make those acts compete is the other acting categories just like at the Primetime Emmys? A gender neutral category is useless. The younger acting categories have been crap since the late ’00s. Good riddance!”

victornewman: “Totally agree. Just get rid of the categories and let the better young actors compete with the old folks. The best ones (Jennifer Finnigan, Jonathan Jackson, et al) would have always been competitive, even when more soaps were airing.”

syrus80: “I don’t like this. I am not a fan of how the Grammys do this and I think it’s an awful idea for the Daytime Emmys.”

gatorman: “I voted NO. Keep both the younger actor and actress categories.” 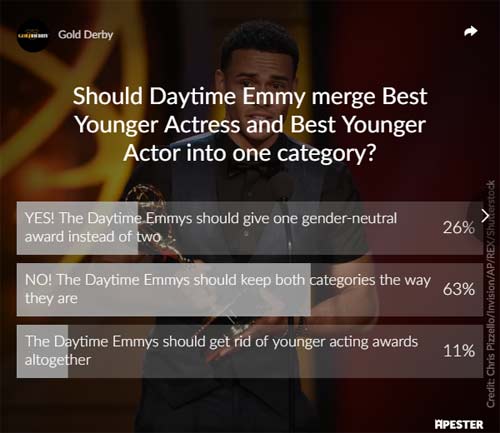