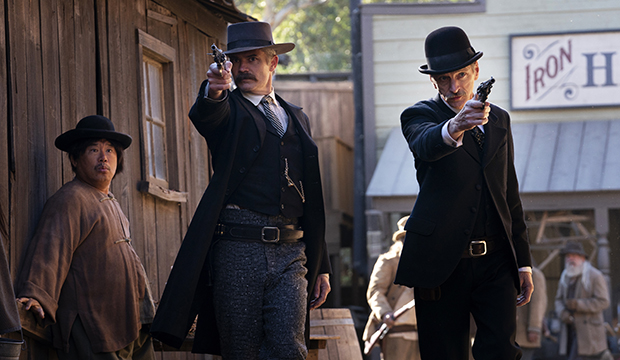 “Black Mirror: Bandersnatch”‘s hold on the top spot in our Best TV Movie Emmy odds is looking a little wobbly now. The anthology installment still leads with 18/5 odds, but it might not be able to hold off “Deadwood: The Movie” for long.

“Deadwood,” which premieres on HBO on May 31, the last day of Emmy eligibility, has now improved to 37/10 odds, thanks to nine Experts picking it to win. Just a month ago, it had five Experts backing it, which is what “Black Mirror” has now. That nearly double support is no doubt due to the fact that “Deadwood” screeners have been sent out for press and the film had its premiere last week, receiving overwhelmingly positive notices. (It currently has a 100 percent on Rotten Tomatoes; there’s no Metacritic score yet because it’s awaiting more reviews.)

Once “Deadwood” premieres and the public gets a taste of Al Swearengen (Ian McShane) & Co. again, look for it to garner more support. At the moment, 20 of our Top 24 users are predicting “Black Mirror” to win, with three selecting “Deadwood” and one going out on a limb for “King Lear.” Our Editors are split at five for “Deadwood” and three for “Black Mirror.”

Each contender has strong arguments for a win. The two-time reigning champ in the category with “San Junipero” and “USS Callister,” “Black Mirror” could easily three-peat, thanks to voter laziness and inertia. Meanwhile, “Deadwood” is finally getting the proper ending it was never able to have 13 years after the series’ abrupt cancellation following a three-year run. The acclaimed David Milch Western’s biggest Emmy win was in directing for Walter Hill for the pilot in 2004, and it was only up for Best Drama Series once, in 2005, so the Emmys deliver a belated make-up win here. Plus, though Netflix took over with “Black Mirror” the past two years, HBO is still the king of the TV movie category, with 21 victories, the last coming in 2015 for “Bessie.”

But the biggest tell-tale sign in favor of “Deadwood” is a new rule stipulating TV movies be at least 75 minutes long to qualify. “San Junipero” would not have qualified, but “USS Callister” would have been fine under this rule. This stricter guideline indicates that the academy might be less than thrilled by “Black Mirror” winning with its standalone episodes (“Sherlock” won in 2016 with “The Abominable Bride”). “Bandersnatch,” a choose-your-own-adventure episode with five endings, has an average runtime of 90 minutes, with the shortest being 40 minutes.

Rounding out our TV movie predictions are “King Lear,” “Brexit” and “My Dinner with Herve.”