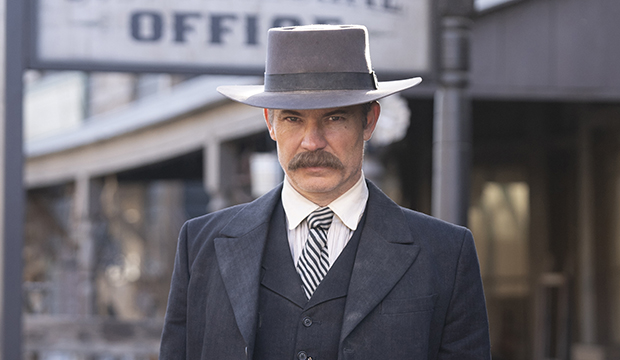 In the “Underappreciated During Its Time” file at the Emmys, you’ll find “Deadwood.” David Milch‘s beloved Western won eight Emmys during its original three-season run on HBO from 2004-06, and only one of them was in a major category, Best Drama Directing for Walter Hill‘s work on the pilot. It boasts just one Best Drama Series nomination, and despite its sprawling ensemble cast, only three stars, Ian McShane, Robin Weigert and Brad Dourif, earned bids. But now, thanks to the upcoming TV movie “Deadwood: The Film,” its two leads could finally nab a statuette — but not in acting. Or shall we say, not just in acting.

McShane and Timothy Olyphant, who reprise their roles as Al Swearengen and Seth Bullock, respectively, are not only stars of the film, but executive producers as well — a title they didn’t have on the original series. That means if “Deadwood: The Film” wins Best TV Movie, they, pending vetting by the TV academy, would take home Emmys themselves. Now that’s an Emmy IOU we like.

Producing credits can sometimes be a vanity title for actors as part of a renegotiation on a long-running show, but provided you were involved enough in the shepherding of the project, it’s another avenue to an Emmy victory for stars. It’s how Reese Witherspoon still scored an Emmy for 2017 Best Limited Series champ “Big Little Lies” after losing the lead actress honor to co-star and fellow executive producer Nicole Kidman, who double-fisted Emmys that night. Bryan Cranston became a producer on “Breaking Bad” starting with the fourth season in 2011, so he has two Emmys for the show’s back-to-back Best Drama Series wins in 2013-14 on top of his four for Best Drama Actor.

SEE Al Swearengen and all your favorite mustaches are back in the first ‘Deadwood: The Movie’ trailer [WATCH]

On the other hand, Jon Hamm was added as producer on “Mad Men” in the fifth season in 2012, but the show never won Best Drama Series again after its initial four-peat. (Hamm, of course, finally got his Best Drama Actor Emmy for the final season in 2015.)

“Deadwood” is currently in second place in our combined Emmy odds, trailing “Black Mirror: Bandersnatch”; “King Lear,” “Brexit” and “My Dinner with Herve” round out the top five. “Black Mirror” is the two-time reigning champ (for “San Junipero” in 2017 and “USS Callister” in 2018), but there are a few things working in favor of “Deadwood.”

First, the TV Academy instituted a new rule requiring TV movies to be at least 75 minutes long to qualify, which would have eliminated “San Junipero,” but not “USS Callister.” That suggests that some in the academy ranks are not happy with, or at least tired of, “Black Mirror” triumphing with its standalone episodes (“Sherlock” won in 2016 with “The Abominable Bride”). Second, “Bandersnatch” is a choose-your-own-adventure episode with five endings, with an average runtime of 90 minutes (the shortest setting is 40 minutes, which would not qualify). Some voters might love that interactive element, but others might be confused and just want a straightforward story.

“Deadwood,” which premieres on HBO on the last day of eligibility, May 31, would definitely have that. Plus, fans have been waiting for this moment since the show was canceled in 2006 (the initial plan was to make two TV movies in lieu of a fourth season). Thirteen years of anticipation could go a long way if the film delivers.

And according to Olyphant, it does. During an appearance on “Late Night with Seth Meyers” last week, Olyphant, who only has one Emmy bid, for “Justified,” shared that he has seen the film and he “couldn’t be more proud of it.” “It’s lovely,” he said. “I hope people enjoy it.”

Olyphant, who’s in 16th place in our lead actor odds (McShane is in fifth in the super crowded field, topped by “True Detective” star Mahershala Ali), added that he had “resisted” the idea of a movie for a while, but is now grateful he had a change of heart about revisiting his breakthrough role. “I thought it was a very, very bad idea,” he said. “I’ve really just enjoyed the experience. I think I underestimated the impact those people had on my life so many years ago. And that show, it was just a remarkable experience. … Very thankful for the opportunity to go back and see them all again.”

And he even grew his own monster of a ‘stache this time. “The real guy had a huge mustache. I always thought if we’re ever gonna do it again, I’m gonna really do deep method, be the guy,” he quipped. “[And] I thought the bigger I go, if this thing sucks, I’ll just tell people it’s not me. … You can be like, ‘What’d you think of the ‘Deadwood’ movie? I thought [Josh] Duhamel did a great job. … They got Duhamel to play Bullock. I thought he did fine.'”