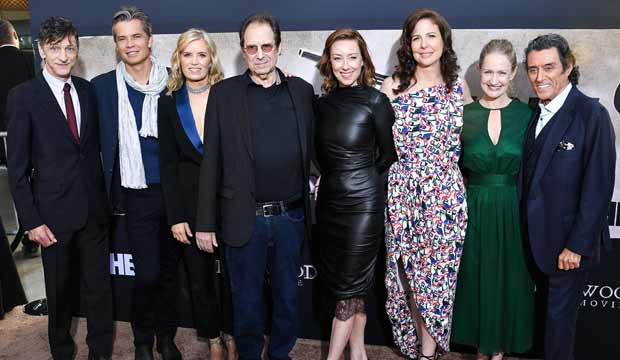 Thirteen years after its untimely cancellation, the sun rose once again on the town of “Deadwood.” On Tuesday HBO premiered its long awaited TV movie, which wraps up several loose ends from the original show’s three-season run, at the historic Arclight Cinerama Dome in Hollywood.

SEE Ian McShane and Timothy Olyphant may get their Emmy I.O.U. for ‘Deadwood’ – but not in acting

Set 10 years after the events of the final episode, “Deadwood: The Movie” finds the foul-mouthed citizens of the South Dakota mining town banding together to defeat the villainous George Hearst (Gerald McRaney), now a United States Senator, who has returned to snatch up more land for his own megalomaniac purposes.

Milch, who recently revealed he had been diagnosed with Alzheimer’s, gave opening remarks about the films long journey to the screen. “They say you can’t go home again,” he said, “but I think we may have proved them a little wrong. We may be older and slower, hopefully a little wiser as well, but certainly we’re grateful, because I know this didn’t settle easy into place.”

He added, “to hear and see this work once again brought to life by our incomparable actors was an unmitigated joy. It’s been my honor to write for you.” He thanked HBO for the “Herculean effort” it took to bring everyone back together again and his family for their “continued support, encouragement and love.”

“Being here with you all again reminds me of the transformative power of our work,” he continued. “Coming together to create something that reflects the fullness of life, with all its beginnings and endings, sorrows and joys, is the greatest affirmation of hope and purpose that I could ask for. Thank you all for making it happen, and God bless us, everyone.”

Minahan, who directed four episodes from the original run before helming this revival, also spoke. He praised the cast, who “lived in these characters for… the three years we were on the air, and kept them in their hearts for another 12 years while we were away.” He also thanked Milch, who “unleashed the amazing, shocking, horrible and beautiful community of Deadwood on the world all those years ago.”

During its original three seasons the show earned 28 Emmy nominations, including Best Drama Series in 2005, plus acting bids for McShane in lead (he won the Golden Globe in 2005) and Dourif and Weigert in supporting. It won eight prizes, including Best Drama Directing for Walter Hill (for the pilot), plus victories in sound editing, art direction, cinematography, costumes, hairstyling and non-prosthetic makeup (twice). Milch competed for writing the pilot.

Following the premiere, the cast, crew and guests gathered at The Sunset Room, made up to look like the town of Deadwood, for some food, drinks, and gambling. “Deadwood: The Movie” premieres Friday, May 31 on HBO.