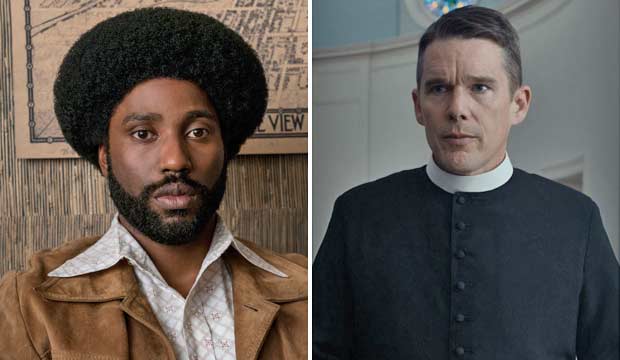 I saw a star being born and it wasn’t Lady Gaga. It happened on a dance floor early on in Spike Lee’s “BlacKkKlansman” when Ron Stallworth, an undercover cop who — with the help of a white colleague — infiltrates the Ku Klux Klan, lets loose and starts pulling some fine Soul Train moves with a pretty and smart female head of a black student union. They go to a disco and soon they are both crooning along with the Cornelius Brothers and Sister Rose’s “It’s Too Late to Turn Back Now.” With his smooth moves, humorous aplomb,  sweet smile and warm eyes, John David Washington is going places even if he sports a massive mushroom cloud of an Afro in this breakout role.

It might be a cliché. But sometimes it is an honor just to be nominated for an award, which in and of  itself can lead to opportunities. That could prove true for Washington, who currently ranks at No. 5 among the lead-acting candidates on the combined Oscar odds chart based on the predictions of Experts, Editors and Users. The ascension of Denzel Washington’s 34-year-old son is in part thanks to Lee. While the director also worked with his father on 1990’s “Mo’ Better Blues” and 1992’s “Malcolm X”– the source of his dad’s first Best Actor bid for an Oscar– the younger Washington told the Associated Press in an interview that he appreciated that Lee picked him for his talent and not his family ties. He considers it a compliment that the director  “believed in my ability. I didn’t feel pressured. I felt encouraged.”

But then I looked below his name and saw who was at No. 6 – namely, Ethan Hawke as a sickly minister trying to make sense of the world as his flock dwindles in Paul Schrader’s “First Reformed.” How seredipitous that the 48-year-old Hawke’s first Oscar nomination in a supporting role was as a rookie LAPD cop opposite Denzel Washington’s corrupt narcotics officer in 2001’s “Training Day.” Of course, his top-billed co-star would make history as just the second black performer to win Best Actor after Sidney Poitier in 1963’s “Lilies of the Field.” He would later reunite  with  Washington and “Training Day” director Antoine Fuqua on a  2016 remake of “The Magnificent Seven.”

When asked a couple years ago about his experience with Washington on “Training Day,” Hawke had this to say: “Denzel, don’t f— with him, man — you know, come to the set with some sloppy work. I loved it. I love somebody [who] sets the bar high, for crying out loud. I mean, everybody just is so complacent. It’s like they’re waiting for Martin Scorsese to show up to give them permission to do great work. Why not do it now?”

Indeed. Hawke, who broke out 30 years ago as a shy prep school student inspired by Robin Williams’ English teacher in 1989’s “Dead Poets Society,” would have to wait until 2014 to receive a second supporting nomination for “Boyhood” as a footloose father who grows up along with his children.  He also shared in two adapted screenplay Oscar nominations for 2004’s “Before Sunset” and 2013’s “Before Midnight.”

Hawke is close to being in the overdue club of actors who have yet to take home an Academy Award.  But I can’t help but think that his first acting nomination did elevate his status in the industry and afforded him with an abundance of opportunites in films big and small , mainstream and experimental,  hits and flops. He has also found success on stage and was Tony-nominated for Tom Stoppard’s eight-hour-long production of “The Coast of Utopia,” has written a well-received novel and made a 2014 documentary about classical musician Seymour Bernstein. He will return to Broadway on January 24 opposite Paul Dano in a revival of Sam Shepard’s “True West.” It seems as if he has never been more in demand.

For now, Hawke and Washington are both up for Independent Spirit Awards on February 23, the day before the Oscars but in separate categories. Being nominated might be honor enough. But it would be great if Hawke snared the lead trophy for “First Reformed” and Washington made off with the supporting gold for another cop-related film,“Monsters and Men.’’ But both already have reasons a-plenty to celebrate.