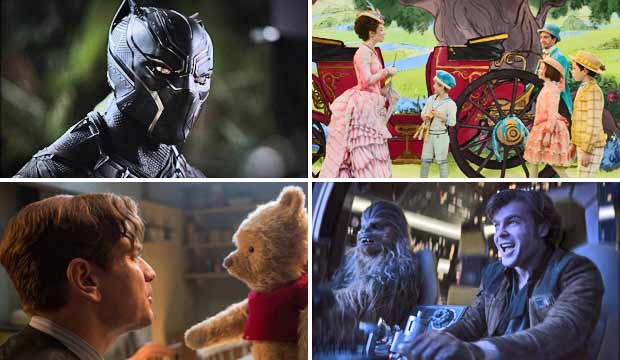 One fringe benefit for Disney in gradually gobbling up all the intellectual property known to man is an Oscar race like Best Visual Effects, where the behemoth studio could run the board. There are 10 films on the academy’s shortlist in the category, and Disney accounts for 6 of them. How many will make the final lineup?

Three of the shortlisted Disney films are from the Marvel Cinematic Universe: “Ant-Man and the Wasp,” “Avengers: Infinity War” and “Black Panther.” Another is from a long time ago in a galaxy far, far away: “Solo: A Star Wars Story.” Rounding out their offerings are the live-action “Winnie the Pooh” film “Christopher Robin” and the musical sequel “Mary Poppins Returns.”

The other four films jockeying for position amid the Disney domination are Universal’s “First Man,” “Jurassic World: Fallen Kingdom” and “Welcome to Marwen,” and Warner Bros’ “Ready Player One.”

Based on the combined predictions of thousands of Gold Derby users, three of the six Disney films will make the cut, and one way or another Disney seems poised to win. “Black Panther” is the front-runner with 69/20 odds, and out of two dozen Experts journalists predicting that race as of this writing, 21 currently agree that “Panther” will win. The other three think the academy will go for “Avengers,” which ranks second overall in our forecasts.

Those forecasts could soon flip, though. “Avengers” led the recently announced nominations for the Visual Effects Society Awards, while “Black Panther” was shut out entirely. I guess there was only room in that town for one Wakandan adventure.

SEE‘Black Panther’ can rebound at Oscars despite BAFTA snubs: The Americans have liked it way more than the Brits

Those two front-runners are followed by “Ready Player One” and “First Man,” and then Disney again at number-five with “Mary Poppins.” After that, “Solo” is on the bubble in sixth place, while “Ant-Man” and “Christopher Robin” are 100/1 long shots. But both “Christopher Robin” and “Solo” just got a boost too: they joined “Avengers” in the top category at the VES Awards.

Disney has had luck with other properties, though. The studio won just two years ago for its live-action version of “The Jungle Book” (2016), and before that it prevailed for “Pirates of the Caribbean: Dead Man’s Chest” (2006). This year the Mouse House could get back onto the Oscar stage with the help of a panther, ant, spider, Wookiee, bear or magic nanny.