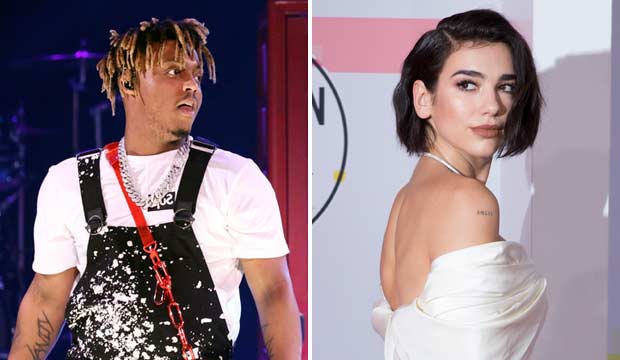 Many of us were surprised when Dua Lipa beat Album of the Year nominee H.E.R. for Best New Artist at the Grammys, but she’s not going to catch us unaware this time. According to the combined predictions of hundreds of Gold Derby users, she’s the frontrunner to win Top New Artist at the Billboard Music Awards with leading odds of 11/2. But these awards are decided differently, and that might actually favor her rival, Juice WRLD.

The Billboard Awards are not voted on based on quality, per se. They’re decided by the same metrics that determine the weekly Billboard charts: fan interactions with music, including record sales, online streams, radio airplay and more. Dua Lipa has certainly been a success by that measure, with her self-titled album certified gold by the Recording Industry Association of America and three platinum singles in the last year (“New Rules,” “IDGAF” and “One Kiss”).

But Dua Lipa’s album was released in 2017, and so was “New Rules,” which is her biggest hit to date. The Billboard Awards eligibility period ran from March 23, 2018, to March 7, 2019, which wasn’t as active a period for the breakthrough singer. Indeed, she only has two other Billboard nominations this year: Top Dance/Electronic Song (“One Kiss”) and the fan-voted Billboard Chart Achievement Award.

Meanwhile, Juice WRLD has seven total nominations, including Top Hot 100 Artist and Top Rap Artist. His debut album from last May, “Goodbye and Good Riddance,” charted higher than Dua Lipa’s (peaking at No. 4) and has gone platinum. His breakthrough single, “Lucid Dreams,” also charted higher than Dua Lipa’s songs (peaking at No. 2), and it has gone four times platinum. “Lucid Dreams” alone is up for four Billboard Awards including Top Hot 100 Song.

As of this writing, Juice WRLD ranks a close second to Dua Lipa in our predictions with odds of 6/1. He’s backed by 10 of our Top 24 Users who got the highest scores predicting last year’s Billboard Award winners, and by seven of our All-Star Top 24 who got the highest scores when you combine predictions from the last two years. So while the odds favor Dua Lipa at the moment, Juice WRLD may have the numbers on his side.