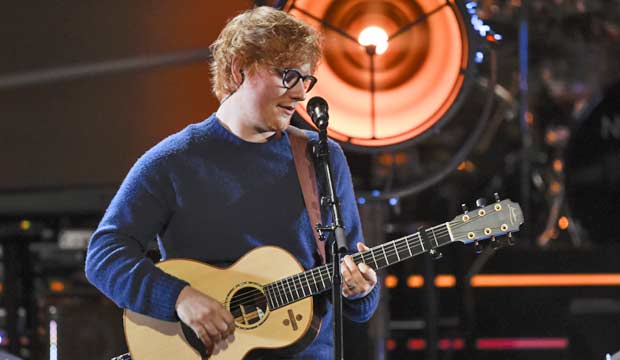 Ed Sheeran recently released a new duet with Justin Bieber, “I Don’t Care,” and on May 23 he announced an entire album’s worth of collaborations. “No. 6 Collaborations Project” will drop on July 12, a month before the new Grammy eligibility deadline of August 31. Will he get revenge at the awards after his last album was snubbed in the general field? Scroll down to see his official Instagram announcement.

“Before I was signed in 2011, I made an EP called ‘No. 5 Collaborations Project,'” Sheeran explained. “Since then, I’ve always wanted to do another, so I started ‘No. 6’ on my laptop when I was on tour last year. I’m a huge fan of all the artists I’ve collaborated with and it’s been a lot of fun to make.” He didn’t reveal who those collaborators are, though, except for his already released “I Don’t Care” with Bieber and his next single, “Cross Me” with Chance the Rapper and PnB Rock. The rest of the names are redacted.

Sheeran’s last album, “Divide” (2017), was a quadruple platinum hit and produced the most successful single of his career, “Shape of You.” Despite that success, however, he was surprisingly snubbed from the Grammy races for Album of the Year, Record of the Year and Song of the Year. But he did win Best Pop Album and Best Pop Solo Performance for “Shape,” which brought him to a total of four career wins. That was before the Grammys expanded the general field categories from five nominations to eight, so maybe there’s more room for Sheeran to maneuver this time around, especially in a year that so far hasn’t seen a decisive Grammy front-runner. Do you think he’ll be a contender this time?

Before I was signed in 2011, I made an EP called No.5 Collaborations Project. Since then, I’ve always wanted to do another, so I started No.6 on my laptop when I was on tour last year. I’m a huge fan of all the artists I’ve collaborated with and it’s been a lot of fun to make. No.6 Collaborations Project will be out everywhere on 12 July. It’s available to pre-order from midnight tonight local time and my song with @chancetherapper and @pnbrock will be out everywhere at the same time x