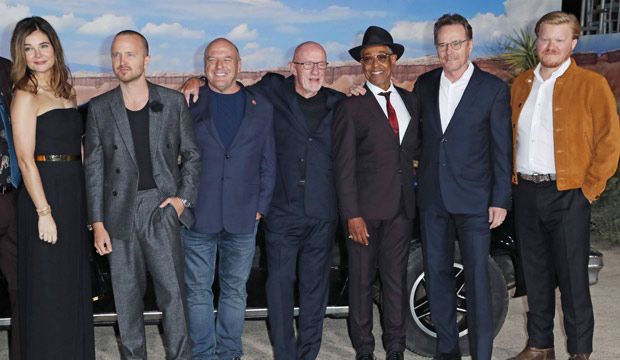 Now that you’ve seen Netflix‘s highly anticipated “Breaking Bad” movie — and if you haven’t, stop reading this spoiler-filled article right now! — you know that Aaron Paul should dust off his awards mantel to prep for the likely onslaught of statuettes he’s about to receive for reprising his role as meth-making tragic hero Jesse Pinkman. But there’s one other former cast member who appears throughout “El Camino: A Breaking Bad Movie” that I’m hoping awards voters will also consider: Jesse Plemons.

As “Breaking Bad” viewers may recall, Plemons’ role as creepy Todd Alquist, an aspiring meth cook and nephew of white supremacists, came to a brutal end in the 2013 series finale when Jesse broke free of his cage and choked him with a chain. While that was the end of Todd in the TV series, he pops up in several key flashbacks in Netflix’s film. Back when Todd was keeping Jesse in captivity, there was one weekend where he let the scraggly prisoner out to help him with a “favor.” As it turns out, Todd’s cleaning lady had discovered where he hid his meth money, so he strangled her with his belt and then needed Jesse’s help to get rid of the body.

Every moment Plemons appears on-screen is a gift to “Breaking Bad” fans who loved to hate the murderous psychopath of a character. Case in point: while Jesse and the cleaning lady’s corpse are in the backseat of the titular El Camino, Todd wistfully sings a song as he sticks his arm out the window and feels the wind between his fingers. Plemons’ money scene is his last one. When Jesse threatens to kill Todd with a gun he finds in the glove compartment, Todd’s hilarious gut instinct is to offer him pizza and beer if he refrains from shooting him.

Plemons is no stranger to the Emmy Awards, earning two nominations in the TV movie/limited series races for his lead role in “Black Mirror: USS Callister” (2018) and his supporting turn in “Fargo” (2016). He also took home a Screen Actors Guild Award as a member of the “Breaking Bad” cast when they prevailed at the 2014 ceremony. Though Plemons has yet to be recognized at the Golden Globes, it’s possible voters could throw him a bone this year in the catch-all TV supporting actor category thanks to his impact in “El Camino.”

As for the awards chances of the film’s lead actor, Paul is already in Emmy’s good graces as he won three times in the supporting race for “Breaking Bad” (2010, 2012, 2014). That was actually a record in the category until Peter Dinklage (“Game of Thrones”) beat it this year. Paul previously contended at the Golden Globes in 2014 as a supporting actor, and is now looking to earn his first nomination as a leading man. He also took home a Critics’ Choice TV Award for his final season on the show and shared in that SAG ensemble victory with Plemons and the rest of the cast.