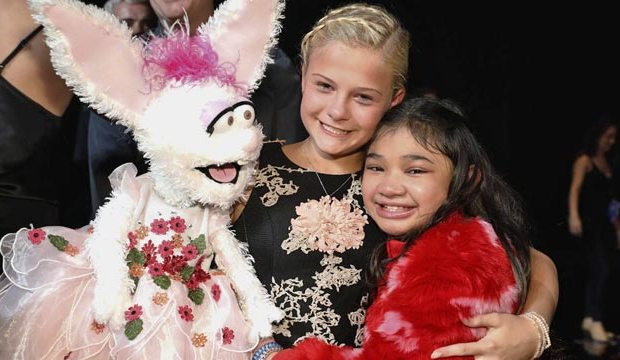 Back in Season 12 of “America’s Got Talent,” ventriloquist Darci Lynne Farmer and singer Angelica Hale battled for viewers’ votes week after week. Eventually it came down to the two of them, with Darci Lynne being named the winner and Angelica coming in second place. Flash-forward two years to spinoff series “AGT: The Champions” and their fates have completely flipped. Darci Lynne (now 14) was eliminated in Week 2 while Angelica (now 11) advanced to the Finals in Week 3. Well, even though she’s off the show, that’s not stopping Darci Lynne from proving she’s a class act.

SEE‘AGT: Champions’ mystery solved: NBC tells us how Superfans were chosen, where they watched, how they voted

After Angelica earned Howie Mandel‘s Golden Buzzer this week, Darci Lynne took to Twitter to show her unwavering support. She wrote, “CONGRATULATIONS to my friend @angelicahale you were AMAZING!!! Love you!!” Darci Lynne later congratulated Paul Potts for making it to the Finals, the opera singer who sailed through thanks to the Superfan vote.

CONGRATULATIONS to my friend @angelicahale you were AMAZING!!! Love you!! 💗🎉💗

Angelica and Paul are now two of the finalists who will compete for the title of “Champion” during the performance show on February 11. The winner will be crowned one week later during the February 18 results finale. So far the other four finalists to make it through are extreme knife throwers Deadly Games, singer Susan Boyle, comedian Preacher Lawson and opera/rock singer Cristina Ramos.

With Darci Lynne out of the competition, many fans are hoping that there’s a wild card twist in store for her. Since other version of NBC’s reality TV show include wild cards, in which judges bring back previously eliminated acts, it only makes sense that “America’s Got Talent: The Champions” might also have this twist.