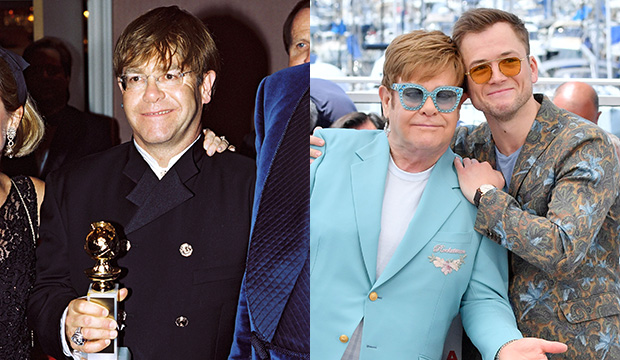 Elton John is nominated for Best Original Song at the Golden Globes for “(I’m Gonna) Love Me Again” from “Rocketman,” which is an apt title because Globe voters may just award him again with a second win. That would in turn make John break the record for the longest gap between victories at 25 years.

Sixteen people have won the Best Original Song Globe more than once, with Alan Menken winning a record four. Carole Bayer Sager currently has the longest gap at 17 years between her triumphs for “Arthur’s Theme (Best That You Can Do)” from “Arthur” (1981) and “The Prayer” from “Quest for Camelot” (1998). In contrast, Menken won his four in a seven-year span during the Disney Renaissance for penning “Under the Sea” from “The Little Mermaid” (1989), the title track from “Beauty and the Beast” (1991), “A Whole New World” from “Aladdin” (1992) and “Colors of the Wind” from “Pocahontas” (1995).

A five-time nominee, John took home his first and only Globe so far for “Can You Feel the Love Tonight” from “The Lion King” (1994), which he shared with Tim Rice (they were up against themselves in the category for writing “Circle of Life” from the Disney classic). Rice has two other wins himself, both also in the ’90s, for “A Whole New World” and “You Must Love Me” from “Evita” (1996).

Of course, one of John’s rivals this year is Beyonce‘s “Spirit” from the “live-action” (or if you ask the Hollywood Foreign Press Association, animated) remake of “The Lion King.” The circle of life indeed. John wrote “(I’m Gonna) Love Me Again” with his longtime lyricist Bernie Taupin, who is also seeking his second Globe. Taupin prevailed for “A Love That Will Never Grow Old” from “Brokeback Mountain” (2005) with Gustavo Santaolalla, so his gap would be at 14 years — just below Bruce Springsteen, who currently has the second longest gap at 15 years with his pair of wins for “Streets of Philadelphia” from “Philadelphia” (1993) and the title track from “The Wrestler” (2008).

At the moment, “(I’m Gonna) Love Me Again,” which is performed by John and “Rocketman” star Taron Egerton, occupies the top spot in our odds, followed by “Beautiful Ghosts” from “Cats,” “Into the Unknown” from “Frozen II,” “Stand Up” from “Harriet” and “Spirit.” All but “Beautiful Ghosts,” written by Taylor Swift and Andrew Lloyd Webber, made the Oscar shortlist for Best Original Song.