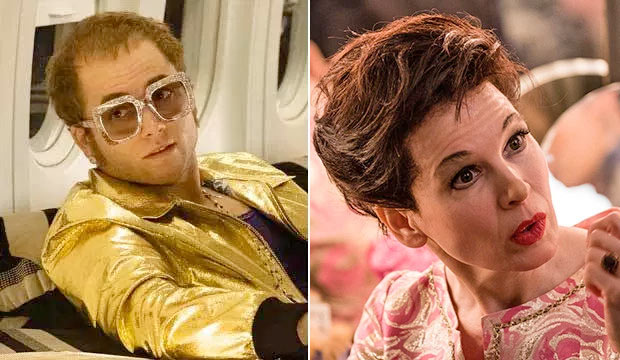 Elton John has been everywhere lately in some shape or form, given that his musical fantasia of a biopic, “Rocketman,” premieres today at the Cannes International Film Festival. Last week, the flashy  costumes inspired the designers on “Project Runway” and his songs were performed by the Top 5 on Sunday’s “American Idol.”  He even recorded a video for the reality talent show. Meanwhile, Fandango is selling tickets for an early screening on May 18 before the film, directed by Dexter Fletcher who took over the reins of “Bohemian Rhapsody,” officially lands in theaters nationwide on May 31.

Given the success of the tune-filled tale of Freddie Mercury‘s rise as the front man for Queen, both at the box office and at last year’s Academy Awards where it took home four trophies (including Best Actor for star Rami Malek),  this musical outing could join the 2020 race. Starring as the young Elton is Taron Egerton (see above). One major difference is, unlike Malek, the headliner of the “Kingsman” franchise is handling the vocal duties all by himself as the film covers the John’s musical ascent in the late ’60s and early ’70s.

But “Rocketman” might get some competition from another musical biopic, “Judy,” which recently put forth a fabulous one-minute teaser trailer. It stars Renee Zellweger (see above) — who has movie musical cred after being Oscar-nominated for her role as murderous chorine Roxie Hart in 2002’s “Chicago” — as Judy Garland in her later years, just before she died at age 47 from a barbiturate overdose in 1969.

So which truth-based showbiz saga is likely to make the biggest splash at the box office. Judging by our Gold Derby poll, Elton John fans are much more excited to see their idol’s early days portrayed on the big screen — 38% to be exact. And 15% are happy that Egerton himself actually croons some of the rocker’s greatest hits all by himself — unlike Malek, who had some assistance on vocals.

As for ‘Judy,” it covers the “The Wizard of Oz” legend’ as she performs in London late in her career. While Garland has countless fans around the world, 25% who answered the poll are more drawn to the fact that the under-seen Zellweger — who hasn’t had a major part since the 2016 sequel, “Bridget Jones’ Baby” — are eager to observe her dive into such a juicy role. Only 15% are drawn to witnessing Garland’s tragic end dramatized.

Given its opening date of Sept. 27, right as awards season is warming up, Zellweger could be in the running for a lead Oscar to go along with her supporting actress Academy Award for 2003’s “Cold Mountain.”